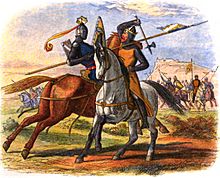 Sir Henry de Bohun (died 23 June 1314) was an English knight, the nephew of Humphrey de Bohun, Earl of Hereford. He was killed on the first day of the Battle of Bannockburn by King Robert the Bruce. Riding in the vanguard of heavy cavalry, de Bohun caught sight of the Scottish king who was mounted on a small palfrey (ane gay palfray Li till and joly) armed only with a battle-axe. De Bohun lowered his lance and charged, but Bruce stood his ground. At the last moment Bruce manoeuvred his mount nimbly to one side, stood up in his stirrups and hit de Bohun so hard with his axe that he split his helmet and head in two. Despite the great risk the King had taken, he merely expressed regret that he had broken the shaft of his favorite axe.

All content from Kiddle encyclopedia articles (including the article images and facts) can be freely used under Attribution-ShareAlike license, unless stated otherwise. Cite this article:
Henry de Bohun Facts for Kids. Kiddle Encyclopedia.