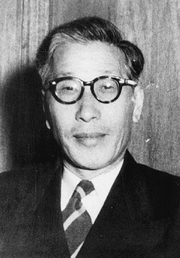 In this Korean name, the family name is Heo.

Heo Jeong (Hangul:허정, Hanja:許政, April 8, 1896 – September 18, 1988) was a South Korean politician and independence activist. In 1948 he was the second Transportation Minister of South Korea. In 1950 he was Social Affairs Minister, in 1951 Prime Minister (Acting) of South Korea, and in 1952 Government Services Minister.

In 1957 he was the eighth Mayor of Seoul City until 1959. On April 19, 1960, he became Foreign Affairs Minister. On April 25 his ministries involved being Acting President of South Korea. In June 1960 he became the sixth Prime Minister of South Korea. His nickname was YooYang (우양).

All content from Kiddle encyclopedia articles (including the article images and facts) can be freely used under Attribution-ShareAlike license, unless stated otherwise. Cite this article:
Heo Jeong Facts for Kids. Kiddle Encyclopedia.