The Higgins Armory Building is a historic structure, held to be the first building constructed solely out of steel and glass. It was built on the premises of the Worcester Pressed Steel Company owned by John Woodman Higgins to house his museum-worthy collection of steel artifacts, mostly European weapons and armor but also early American steel constructs. The L-shaped building appears to be a massive city-block sized structure, but in reality it wraps around the former factory, to which it was connected via catwalks. The building was often used to impress potential clients, as well as becoming a locally known museum and cultural venue open to the public.

The museum was first accredited after Higgins died in 1972 by the American Association of Museums and continued operations through the closing of the Worcester Pressed Steel Company in 1975. On January 4, 1978, it was the victim of a theft of arms and armor worth over US$100,000. The museum changed from a private foundation owned by the Higgins family to a public-supported charity in 1979. At the vote to incorporate under a public board of trustees, the incorporators turned down offers by the Metropolitan Museum of Art in New York City to purchase the collection, as well as an offer of a merger with the Worcester Art Museum. The Museum of Fine Arts in Boston offered to buy the entire collection in 1985, but that offer was also turned down. The new museum board rewrote the mission statement, closed the exhibits on modern steel manufacturing, and devoted the museum entirely to ancient and medieval arms and armor. By refocusing the collection, the board created the only museum in America devoted purely to arms and armor. The Higgins Armory lost this title in 2004 with the opening of the Frazier Historical Arms Museum in Louisville, Kentucky.

The Higgins Armory began facing fiscal issues during the beginning of the 2010s due to a dwindling endowment and inability to raise enough revenue to balance its budget. Deficits at the museum ranged between almost US$1,000,000 and US$500,000, draining the already small endowment to US$2,900,000. In order to shore up the endowment, the board voted in July 2012 to sell off more than 500 objects, with the proceeds being put directly into the endowment. Museum director Suzanne W. Maas stated that it was "simple housekeeping". "We have 10 virtually identical examples of troopers' helmets," she pointed out. "Do we need 10, or do we need seven?"

With the endowment still shrinking, the trustees voted in November 2012 to integrate the museum into the Worcester Art Museum, and they announced in March 2013 that the museum would close at the end of that year. Maas stated, "There is not enough long-term support, and I can say I am very gratified that the trustees have made the tough decision and did not draw it out." The museum closed on December 31, 2013, and now its entire inventory and endowment have been transferred to the Worcester Art Museum less than three miles away. An exhibit displays highlights of the Higgins collection, and the art museum will renovate its current library to house the collection permanently. The new gallery was slated to open in 2015. The building is under new ownership for the first time in more than 80 years and has been renamed the John W. Higgins Armory. It functions as a wedding and event venue and as studio and office space for Worcester's small businesses. 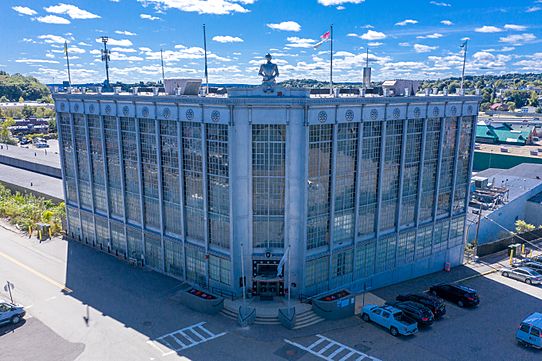 The Higgins Armory Museum building was constructed between 1929 and 1931 specifically to hold Higgin's collection of arms and armor in a museum setting. The four-story Art Deco building was designed by Joseph D. Leland of Boston, Massachusetts. The steel-framed building features large expanses of glass and cost more than $300,000 to construct; it is believed to be the first building constructed solely out of steel and glass.

The building is L-shaped with a chamfered corner. The entrance is located on this chamfer, and a large decoration of a half suit of armor sits on the roof above it. The exterior consists of visible steel pilasters decorated with oversized rivets, dividing sections of glass windows along the sides of the building. A decorative band of steel runs above the first story windows, and a row of large medallions decorates the cornice. The first two floors of the building were originally for offices, while the upper two housed the museum.

The main hall stands in sharp contrast to the exterior. The interior walls of the main galleries were constructed of plaster on metal lathe, and the whole space was designed to resemble Prince Eugene of Savoy's Hohenwerfen Castle in Austria, where Higgins acquired a selection of works in the collection. The walls were finished to resemble the Gothic stone arches in the medieval castle. Medieval-style lighting fixtures can be found throughout the building.

In 1980, the museum was listed on the National Register of Historic Places, and two renovations have been completed since then. The 1988 renovation cost $1.4 million, followed by another in 1992 which used $2.6 million raised in campaign.

All content from Kiddle encyclopedia articles (including the article images and facts) can be freely used under Attribution-ShareAlike license, unless stated otherwise. Cite this article:
Higgins Armory Building Facts for Kids. Kiddle Encyclopedia.