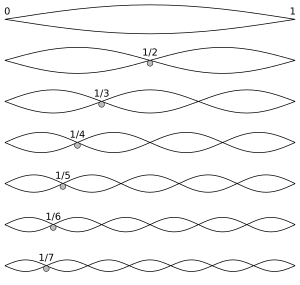 Hilbert spaces can be used to study the harmonics of vibrating strings.

A Hilbert space is a mathematical concept which is a more general type of Euclidean space. It takes the mathematics used in two and three dimensions, and asks what happens if there are more than three dimensions. It is named after David Hilbert.

Vector algebra and calculus are methods normally used in the two-dimensional Euclidean plane and three-dimensional space. In Hilbert spaces, these methods can be used with any finite or infinite number of dimensions. A Hilbert space is a vector space that has the structure of an inner product that allows length and angle to be measured. Hilbert spaces also have to be complete, which means that enough limits have to exist for calculus to work.

The earliest Hilbert spaces were studied in the first decade of the 20th century by David Hilbert, Erhard Schmidt, and Frigyes Riesz. John von Neumann first came up with the name "Hilbert Space". Hilbert space methods made a big difference to functional analysis.

Hilbert spaces show up a lot in mathematics, physics, and engineering, often as infinite-dimensional function spaces. They are especially useful for studying partial differential equations, quantum mechanics, Fourier analysis (which includes signal processing and heat transfer). Hilbert spaces are used in ergodic theory which is the mathematical basis of thermodynamics. All normal Euclidean spaces are also Hilbert spaces. Other examples of Hilbert spaces include spaces of square-integrable functions, spaces of sequences, Sobolev spaces made up of generalized functions, and Hardy spaces of holomorphic functions.

All content from Kiddle encyclopedia articles (including the article images and facts) can be freely used under Attribution-ShareAlike license, unless stated otherwise. Cite this article:
Hilbert space Facts for Kids. Kiddle Encyclopedia.