Hillcrest is a suburb in the City of Logan, Queensland, Australia. In the 2016 census, Hillcrest had a population of 5,626 people.

Hillcrest lies to the west of Browns Plains. It is bounded by Johnson Road, Mount Lindesay Highway, the interstate railway and Coronation Road to the south. 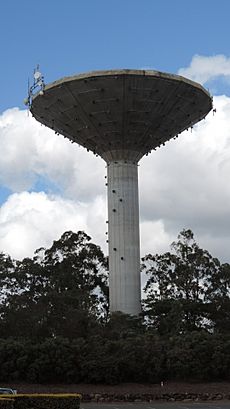 As the name suggests, part of the suburb is on the crest of a hill. The Wineglass Water Tower (named for its shape) on the top of the hill is visible for many kilometres; it is illuminated at night. The water tower holds 1M litres of water and weighs 400 tonnes.

Hillcrest was originally part of Browns Plains and was gazetted as a separate place name in June 1987. 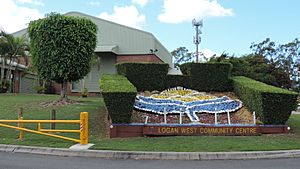 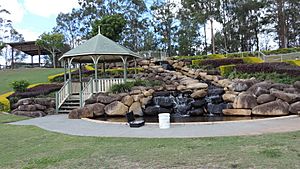 The wineglass water tower was constructed in 1984.

The Park Ridge Ambulance Station was officially opened in May 1982 and was located under the wineglass water tower. It employed three officers and had two ambulance vehicles. The Calam Lions Club donated an ambulance vehicle to the service. A temporary fire station was also located here between 1983 and 1986 when a permanent station known as Logan West was built in Orr Court.

All content from Kiddle encyclopedia articles (including the article images and facts) can be freely used under Attribution-ShareAlike license, unless stated otherwise. Cite this article:
Hillcrest, Queensland Facts for Kids. Kiddle Encyclopedia.