Hillsdale is a small town in Columbia County, N.Y., near Hudson, N.Y., and Great Barrington, Mass. State Routes 22 and 23 intersect near the town center, which is listed on the National Register of Historic Places. The town has several restaurants and a general store, among other businesses. Hillsdale is known for its hilly landscape and is near Bash Bish Falls, Taconic State Park and the Catamount ski area.

The region was taken from the town of Claverack in 1782. The town of Hillsdale was established in 1788.

In 1776 Henry Knox passed through Hillsdale while transporting cannons from Albany, New York, to aid the siege of Boston. There are two markers in Hillsdale along the Henry Knox Trail.

The Dr. Joseph P. Dorr House and Pine View Farm are listed on the National Register of Historic Places. 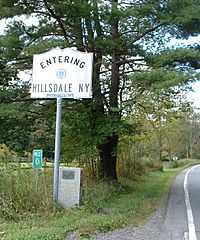 Route 71 enters Hillsdale from Alford, Massachusetts. Note the Knox Trail marker at the foot of the town line sign.

The east town line is the New York – Massachusetts border.

There were 721 households out of which 28.4% had children under the age of 18 living with them, 54.0% were married couples living together, 7.6% had a female householder with no husband present, and 32.6% were non-families. 25.7% of all households were made up of individuals and 10.7% had someone living alone who was 65 years of age or older. The average household size was 2.42 and the average family size was 2.90.

Communities and locations in Hillsdale

All content from Kiddle encyclopedia articles (including the article images and facts) can be freely used under Attribution-ShareAlike license, unless stated otherwise. Cite this article:
Hillsdale (town), New York Facts for Kids. Kiddle Encyclopedia.