The Historic Sixth Street Business District is a set of largely intact two and three-story shops along the main road coming into Racine, Wisconsin from the west. Most of the buildings were constructed from the 1850s to the 1950s. The district was added to the National Register of Historic Places in 1988.

Racine's settlement began in 1834 when Gilbert Knapp claimed 140 acres of land on both sides of the Root River, platting them in 1836 as the Village of Racine. Meanwhile, Stephen Campbell claimed another area to the west, which ended up platted as the Harbor Addition. At first, most of the village's buildings (cabins and houses) were in a clearing south of the river at the foot of Main Street, and the area that became this business district was far out in the woods. But in 1838 Congress allocated money to build a military road from Racine to Janesville, and it ran through the area of Sixth and Seventh Streets. With that, this area became an important route in and out of Racine from the west. The first businesses developed along Main Street south of the river, but in 1848 when the Racine and Rock River Plank Road was built from Monument Square west along Sixth Street and heading out of town to the west, the business district turned west and began to grow along Sixth Street.

Here is a sample of the district's significant buildings in the order built, showing the progression of styles and functions through the years. 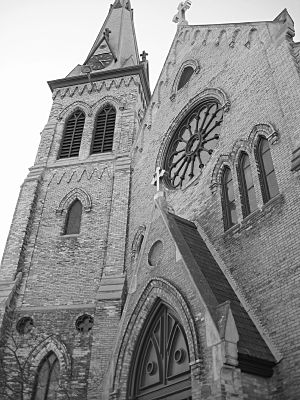 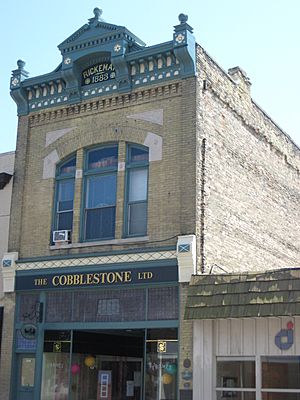 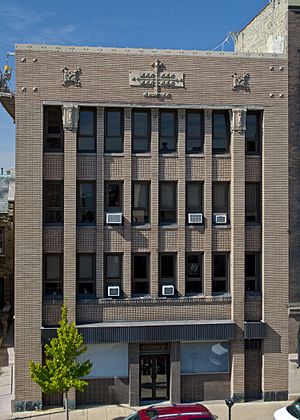 (For more information on any of these, see the references. The WHS links contain photos and the NRHP nomination contains architectural details.)

All content from Kiddle encyclopedia articles (including the article images and facts) can be freely used under Attribution-ShareAlike license, unless stated otherwise. Cite this article:
Historic Sixth Street Business District Facts for Kids. Kiddle Encyclopedia.