Hod Hill (or Hodd Hill) is a large hill fort in the Blackmore Vale, 3 miles (5 km) north-west of Blandford Forum, Dorset, England. The fort sits on a 143 m (469 ft) chalk hill of the same name that lies between the adjacent Dorset Downs and Cranborne Chase. The hill fort at Hambledon Hill is just to the north. The name probably comes from Old English "hod", meaning a shelter, though "hod" could also mean "hood", referring to the shape of the hill.

The fort is roughly rectangular (600 by 400 m (2,000 by 1,300 ft)), with an enclosed area of 22 ha (54 acres). There is a steep natural slope down to the River Stour to the west, the other sides have an artificial rampart, ditch and counterscarp (outer bank), with an additional rampart on the north side. The main entrance is at the south-east corner, with other openings at the south-west and north-east corners. 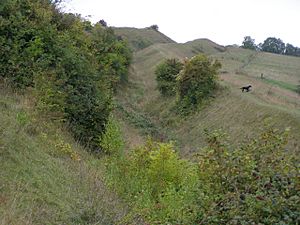 The hillfort was inhabited by the Durotriges in the late Iron Age; whether this is the same tribe who fortified the hilltop in the middle Iron Age (radiocarbon analysis suggests a date of 500 BC for the main rampart) is unknown. There is extensive evidence of settlement within the fort, including platforms for roundhouses.

Hod Hill is the second in a series of Iron Age earthworks, starting from Hambledon Hill, and including Hod Hill, Spetisbury Rings, Buzbury Rings, Badbury Rings and Dudsbury Camp. The Iron Age port at Hengistbury Head forms a final Iron Age monument in this small chain of sites.

The hill was captured in AD 43 by the Roman Second Legion (Augusta), led by Vespasian, who had already captured Maiden Castle and other hill forts to the south. Eleven iron ballista bolts have been found on the hill, clustered in the so-called "Chieftain's hut" area (two hut circles, one of which had an enclosure around it) but there are no other signs of a struggle, suggesting the Durotriges surrendered to the superior Roman army.

The Romans built a camp (200 m2 (2,200 sq ft)) in the north-west corner of the original fort, occupied by a mixed force of 720 legionaries and auxiliaries. The fort was used as a base for about 5 or 6 years, but passed out of use by about AD 50, when troops were withdrawn for the campaigns against Caractacus in Wales, and the remaining men were moved to a new fort further west at Waddon Hill.

The site was excavated in the 1950s by Sir Ian Richmond and his final report was published in 1969. Today the hill is an important calcareous grassland habitat, home to spectacular wild flowers and butterflies.

All content from Kiddle encyclopedia articles (including the article images and facts) can be freely used under Attribution-ShareAlike license, unless stated otherwise. Cite this article:
Hod Hill Facts for Kids. Kiddle Encyclopedia.