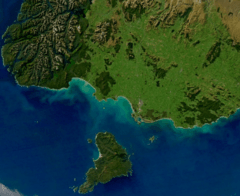 The Hokonui Hills, also known as The Hokonui Mountains or simply The Hokonui, are a range of hills in central Southland, New Zealand. They rise to 600 metres above the surrounding Southland Plains, of which the hills mark a northern extremity.

The Hokonui forms part of the Southland Syncline, a geological fold system which extends northwestward from the coast at The Catlins. Owing to the transform fault which forms the Southern Alps, the westernmost part of the syncline has been transported several hundred kilometres to the north; this western section includes many of the hills within the Kahurangi National Park in the northwest of the South Island.

The Hokonui Hills also splits the Southland Plains in two - to the north and east lies the broad floodplain of the Mataura River, and to the south and west lie the plains of the Aparima and Oreti Rivers. The Oreti's major tributary, the Makarewa River rises in the south of the Hokonui Hills.

The hills lie within a triangle formed by the towns of Gore to the east, Lumsden to the north, and Winton to the southwest, and cover approximately 1,200 km².

All content from Kiddle encyclopedia articles (including the article images and facts) can be freely used under Attribution-ShareAlike license, unless stated otherwise. Cite this article:
Hokonui Hills Facts for Kids. Kiddle Encyclopedia.