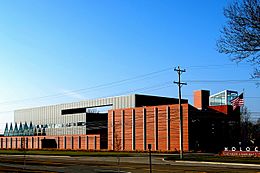 The Holocaust Memorial Center in Farmington Hills, Michigan, near Detroit, is Michigan's only Holocaust museum.

The Holocaust Memorial Center (HMC), the first free-standing institution of its kind in the United States, was founded by CEO Rabbi Charles H. Rosenzveig with his fellow members of Shaarit Haplaytah ("the Remnant," survivors of the Holocaust). It took nearly twenty years of planning and grassroots fundraising before Shaarit Haplaytah was ready to build. Ground was broken for the Holocaust Memorial Center on the property of the Jewish Community Campus at Maple and Drake Roads in West Bloomfield, Michigan, on December 6, 1981. Almost three years later, in October 1984, the HMC was dedicated and opened. When the organization outgrew its original location, it built a new museum on the grounds of the Old Orchard Theatre on Orchard Lake Road in Farmington Hills. The Center's new design received front-page coverage in the Wall Street Journal, with a headline asking, "Should a Museum Look as Disturbing as What it Portrays?". Since its inception, the HMC has been visited by more than one million visitors from all over the world. Tens of thousands of schoolchildren tour the museum each year and speak with a survivor of the Holocaust.

Rabbi Rosenzveig died on December 11, 2008, in Royal Oak, Michigan, at Beaumont Hospital as the result of heart failure. Steve Goldman served as CEO from 2009 until his retirement in February 2016, at which time he was succeeded by Rabbi Eli Mayerfeld.

The expansion on the new site consists of an expanded Holocaust Center and two new museums, designed by Neumann/Smith Architecture.

The Museum of European Jewish Heritage, the largest gallery in the HMC's Core Exhibit, provides visitors with a view of Jewish life in Europe before the Holocaust.

The goal of the Museum of European Jewish Heritage is to educate visitors about the culture and way of life that were destroyed by the perpetrators of the Holocaust, aiming to kindle an awareness of the ethical, moral, spiritual, educational and cultural contributions of the Jewish people, and thereby promote inter-cultural understanding. The museum contains a Timeline of Jewish History, which details the contributions of each major community of Jews, organized by country and historical period, including names, pictures and the nature of individual contributions by authors, artists, communal leaders and institutions. In addition to the Timeline, the history of European Jewish culture is documented through artwork, maps, photographs, audio-visual presentations and a shtetl replica.

International Institute of the Righteous

The International Institute of the Righteous (IIR) provides visitors with a look at the people and institutions who performed acts of altruism in history in the face of evil or great danger.

The IIR pays tribute to those who have rescued and supported their fellow human beings, even at great risk to themselves and their families. Exhibits include portraits and individual biographies together with governmental and organizational histories that highlight altruistic acts.

All content from Kiddle encyclopedia articles (including the article images and facts) can be freely used under Attribution-ShareAlike license, unless stated otherwise. Cite this article:
Holocaust Memorial Center Facts for Kids. Kiddle Encyclopedia.