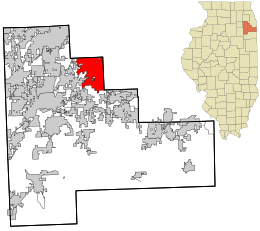 Location in Will County and the state of Illinois.

Homer Glen is a village, located 32 miles (51 km) southwest of downtown Chicago, in Homer Township, Will County, Illinois. The village was incorporated on April 17, 2001.

Homer Glen has a Hispanic or Latino population of 4.9%.

Homer Glen has many parks and athletic clubs, including the Homer Athletic Club, Homer Stallions Football and Lacrosse, Homer Heat Baseball, Illinois Crush Baseball, Lockport Homer Swim Club, and Homer Hawks soccer. The Village finished construction of its first trail system, the Homer Glen Heroes Trail, in late 2011. The trail is dedicated to local heroes and individuals that have made a positive impact on the community. The first event to take place on the Trail was the Mike Hike 5k, which honored local resident PFC Michael C. Olivieri, who lost his life while serving in Iraq in June 2011.

Homer Glen is the location of Annunciation of the Mother of God Byzantine Catholic Church. This church has been awarded for its "green" initiatives, specifically its 10 acres (40,000 m2) of landscaping that focuses on native plant life and water retention / management. Annunciation is notably one of the few new parishes of the Byzantine Catholic Metropolitan Church of Pittsburgh.

Homer Glen is home to St. Bernard's Parish and Our Mother of Good Counsel Parish, both Roman Catholic churches. It is also home to 15 other churches of the Christian faith.

Homer Glen is the site of the Sri Ramakrishna Universal Temple, a branch of the Vivekananda Vedanta Society of Chicago.

All content from Kiddle encyclopedia articles (including the article images and facts) can be freely used under Attribution-ShareAlike license, unless stated otherwise. Cite this article:
Homer Glen, Illinois Facts for Kids. Kiddle Encyclopedia.