Hoopers Island is located on the Eastern Shore of Maryland. The islands are situated on the south-west shores of the Chesapeake Bay in Dorchester County.

Hoopers Island is roughly 20 miles (32 km) long and consists of three small islands. The islands are very narrow in many places and one can easily see water, the Chesapeake Bay and the Honga River, on both sides of Maryland Route 335 which travels through the islands.

The early residents of what is now known as Hoopers Island were the Yaocomico people. According to some local folklore, the land was purchased from the Yaocomico tribe for five woolen blankets.

Hoopers Island is considered the oldest settled area in Dorchester County. The namesake of the islands is Henry Hooper. Hooper was friends with the Calverts, an important family many consider to be founders of the state of Maryland. In the mid-17th century, parts of the islands were surveyed for Hooper. The first parcel of land was surveyed by Robert Clift and aptly titled Hooper's Clifts. An additional 400 acres (1.6 km2) of land was surveyed for Hooper later on in 1668. He received additional parcels of land in 1669 as well.

Though much of the land was claimed by the Hoopers, other families such as William Chaplin, Richard Bentley and Philip Shapeley owned major plots of land. In addition, some indentured servants such as Thomas Hooten and Daniel Puddiford received land.

Due to the geographical nature of Hoopers Island, the residents had to be self-sufficient and independent. Accordingly, the islanders maintained strong family and community ties. Once families moved to Hoopers Island, they stayed for generations. According to one source, for 300 years the population can be traced to just ten families. The outside world did not rapidly influence the way of life on the island. While in the 21st century, many places find it difficult to remain isolated, Hoopers Island maintains a sense of pride on their independence and self-sufficiency. 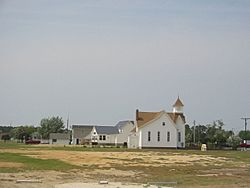 Erosion is a serious threat to the island, as it removes an average of 24.19 acres (97,900 m2) per year. In addition, storm and flood damage along with rising waters had and continue to have an effect on the environment and geography of the islands.

Since the early 20th century, Lower Hoopers Island is no longer inhabited. Prior to this, the island was home to the community of Applegarth which grew tremendously during the oyster boom in the 1880s. Due to erosion, the last resident was forced to leave in the late 1920s. For a short while, farmers continued to use the island to pasture their livestock. Unfortunately, a hurricane destroyed the bridge to Lower Hoopers Island in 1933.

Another section of Hoopers Island has also been affected. Swan Island, originally owned by the indentured servant, Thomas Hooten, has almost disappeared but some of the buildings still stand.

The islands are filled with wild geese and ducks throughout the marshlands. Little and great blue herons, American oystercatchers, double-crested cormorants, willets, herring gulls, Forster's common, royal, and least terns, black ducks, gadwalls, egrets, osprey, and the boat-tailed grackle can all be found in and around Hoopers Island.

According to a 2018 estimate, the population of Hoopers Island was 559.

The islanders host many impressive and enduring social events. One such event involves fishing Hoopers Island. Since 1973, the William T. Ruark Fishing Tournament is considered the island's largest event. Other events such as the Arts and Crafts Auction and Bazaar and the Ronald McGlaughlin Artisans Fair are community affairs that draw residents and visitors alike.

There is a strong sense of community amongst the islanders. One endearing story painted the people and community of Hoopers Island in a very positive light: "strongly independent" "stout-hearted" "self-sufficient", great "sense of community" and "fellowship." Between a strong work ethic and family ties, the community is a strong force that has weathered some negative publicity and difficult times. One such example occurred in the mid-20th century.

In 1954, there was a crabbers strike. Because of the large amount of crabs in the Bay, the price had been so reduced that the fishermen weren't making any money off their catches. Therefore, the crabbers went on strike. Usually strikes are organized by a union who would conduct negotiations in order to improve conditions. For this strike, there wasn't any organized union which promoted the strike but just a tight-knit group of fishermen who wanted their voices heard. Because this strike was not employed by a union, a Baltimore Sun editorial portrayed the crabbers as lazy, uncivilized and uncooperative. In response to this editorial, the Organization of the Volunteer Fire Company sent an eloquent response. This response addressed the negative press the fishermen and the communities received, showing how the fishermen and the communities pride themselves on keeping up with modern ideas, that they were civilized and did not need to utilize unions to work together and make improvement to their lives.

Originally, the main industry on the island was crops. Hoopers Island was mainly known for tobacco crops but during the American Revolution, vegetables and grains were also grown. 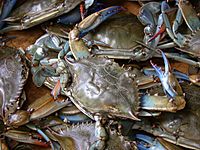 Today, most people who live on Hoopers Island have some connection to the fishing industry. The local families make a living as crabbers, oyster tongers and seafood packers. Seasonal workers from Mexico also work in the processing plants. Unfortunately, because of many factors such as water pollution, the fishing industry is on the decline. The number of crabs has been decreasing at an alarming rate, and the area governments have enacted a number of laws in order to slow the decline of the crabbing industry. As of April 2008, the governors of Maryland and Virginia considered cutting the number of harvested female crabs by one-third. According to an article in The Baltimore Sun, the crabbers of Maryland are not happy with this direction as it might force some watermen out of the business.

The Department of Natural Resources issued new regulations in March 2009, for daily bushel limits for mature female hard crabs and periods of closure for harvest of mature female hard crabs. Mature female hard crab bushel limits were assigned based on license type. The regulation further provided the DNR with the authority to establish and modify a season or catch limit by public notice based on continuous monitoring of stock conditions and harvest rates. The Department withdrew the portion of the 2009 regulatory proposal that would have required a free registration for crabbers not currently required to have a license.

Off the shores of Upper and Middle Hoopers Island is the Hooper's Island Lighthouse. This lighthouse was built in 1906 and is only one of eleven pneumatic caisson lighthouses in the United States.

For over ten years, the Phillips Seafood Factory has been open to visitors. It is at this factory that blue crabs are processed. Phillips Seafood is a company that owns and operates seafood restaurants throughout the east coast. The company origins go back to 1914 on the island, where Augustus E. Phillips established what is now Phillips Seafoods' first seafood processing plant.

All content from Kiddle encyclopedia articles (including the article images and facts) can be freely used under Attribution-ShareAlike license, unless stated otherwise. Cite this article:
Hoopers Island Facts for Kids. Kiddle Encyclopedia.