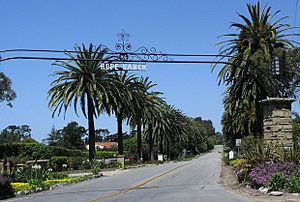 The eastern entrance to Hope Ranch, showing the main thoroughfare through the unincorporated community

Hope Ranch is an unincorporated suburb of Santa Barbara, California, located in Santa Barbara County. It is bounded on the east by Santa Barbara, on the north and west by the unincorporated area of Noleta, and on the south by the Pacific Ocean. As of the 2000 census, the area had an approximate population of 2,200. The ZIP codes are 93105 and 93110, and the community is in area code 805.

Hope Ranch is an upscale community which lies along the coast, immediately west of Santa Barbara, California. It is located between Goleta and Santa Barbara. It is considered to be an equestrian community. Hope Ranch is home to 27 miles of riding trails and 10 percent of residents are horse-owners.

Hope Ranch is named after Irishman Thomas Hope, who purchased the land in 1861 for sheep ranching. Following his death in 1876, his heirs sold the ranch for $250,000 to the Southern Pacific Railroad, who intended to develop the land. It was not until Harold Chase purchased the land in 1923 that the area was developed into the residential area that exists today.

Since it is not a census-designated place, the boundaries are informal, except where they coincide with incorporated regions. On the east Hope Ranch is bounded by the City of Santa Barbara, on the north by Modoc Road, Hollister Avenue, and Vieja Drive, on the west by a vacant tract of land known as More Mesa, and on the south by the Pacific Ocean.

Hope Ranch occupies a hilly area immediately adjacent to the coast; the highest elevation is 691 feet (211 m). The northern boundary of the hilly area is Cieneguitas Creek, which flows down the topographic expression of the More Ranch Fault; this ravine also helps define the informal northern boundary of the suburb. Native vegetation is mostly California oak woodland and chaparral, and many of the homes have been constructed to blend in with the oaks; the area retains much of its tree canopy. Residential roads are narrow and winding, not always signed, and interweave with an elaborate network of horse paths. A road to a private beach is open to residents only (although the beach itself is accessible from public beaches on either side).

The main stretch of road through Hope Ranch is Las Palmas/Marina Drive, a palm tree-lined stretch of roadway along which runs the coastal bike route. Hope Ranch is home to La Cumbre Country Club and Laguna Blanca School, an independent day school, which was founded in 1933.

In addition to being one of the most expensive neighborhoods in Santa Barbara, Hope Ranch is one of the wealthiest areas in California; the median home price was $2.61 million in 2006. Houses with ocean views generally list for at least $5 million, with oceanfront properties going for $25 million and more.

All content from Kiddle encyclopedia articles (including the article images and facts) can be freely used under Attribution-ShareAlike license, unless stated otherwise. Cite this article:
Hope Ranch, California Facts for Kids. Kiddle Encyclopedia.