The Hull Maritime Museum is a museum in Kingston upon Hull, England, that explores the seafaring heritage of the city and its environs. The museum's stated mission is "To preserve and make available the maritime history of Hull and east Yorkshire through artefacts and documents". 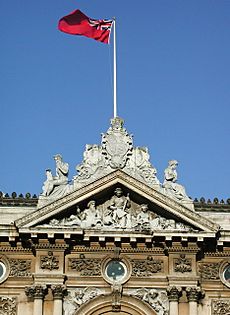 Detail of the Dock Offices building with Red Ensign flying

The museum, originally known as the Museum of Fisheries and Shipping, opened in 1912 in Pickering Park. It moved to its current location, the Dock Offices building, in 1974. The Dock Offices building is so-named as it is the former headquarters of the Hull Dock Company, which operated all docks in Hull until 1893. Built in 1872, it is a Grade II* listed building and a striking example of Victorian architecture. The building stands in Queen Victoria Square, opposite the Queen's Gardens, in Hull's city centre. Hull City Council currently operates and maintains the museum.

In January 2020 the museum is temporarily closing at the beginning of a £11 million programme of conservation and modernisation. It is scheduled to re-open in 2023 as the centrepiece of Hull's "Maritime City Project" and with an additional exhibition floor following the relocation of storage, research and conservation centre in the adjacent Dock Office Chambers.

The period of time covered by the exhibits extends back to the Bronze Age and through the Middle Ages, but the museum primarily concerns itself with Hull's maritime history from the 19th century onward. The museum's exhibits are arranged along the following primary themes:

The museum dedicates an entire gallery to Hull's whaling industry, which peaked in the early 19th century. Dozens of vessels ventured into the Arctic waters (particularly those around Greenland) during this period. The gallery contains personal effects, shipboard items, models, and artwork (including the largest collection of scrimshaw in Europe), and Inuit artifacts, including a kayak.

The city's fishing industry rose to prominence in the mid-19th century, and one gallery of the museum documents the history of the industry as it expanded from the North Sea into more northerly waters. This gallery makes use of models of the industry's various ocean-going vessels, from simple cobles to large trawlers.

Hull's tradition of ocean-going commerce dates from the Middle Ages and has historically targeted the nations of Scandinavia and the Baltic Sea. The Court Room in the Hull Docks building, once for use by the Hull Dock Company's shareholders and now the venue for temporary exhibitions, also pays hommage to Hull's commercial past and present. The room houses a frieze containing the coats of arms of the cities with which Hull has historically had trade relations.

Online: Hull and the sea

As part of its online Hull Museums Collection, Hull City Council launched the Hull and the sea website in 2008. The website allows users to virtually browse the maritime museum's collection, from works of scrimshaw to descriptions and images of the seagoing vessels from the city's past.

During Hull's year as UK City of Culture the Maritime Museum played a prominent role in the opening three-month season entitled Made in Hull. At the opening event during the first week the building was one of three in Victoria Square which had multimedia projections displayed on them, attracting over 300,000 visitors. Throughout the three-month season the Museum hosted a multimedia installation called Bowhead depicting a bowhead whale.

All content from Kiddle encyclopedia articles (including the article images and facts) can be freely used under Attribution-ShareAlike license, unless stated otherwise. Cite this article:
Hull Maritime Museum Facts for Kids. Kiddle Encyclopedia.