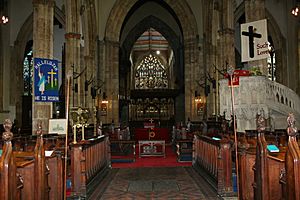 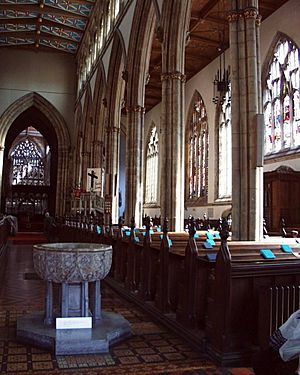 Hull Minster is an Anglican minster in the centre of Kingston upon Hull, East Riding of Yorkshire, England. The church was called Holy Trinity Church until 13 May 2017 when it became Hull Minster.

It is the largest parish church in England by floor area. The church dates back to about 1300 and contains what is widely acknowledged to be some of the finest mediaeval brick-work in the country, particularly in the transepts. The Minster Church is now a Grade I listed building.

The Minster Church is a member of the Greater Churches Group.

William Wilberforce, who led the parliamentary campaign against the slave trade, was baptised in Holy Trinity Church.

In November 2014 plans were unveiled to reorder the church, creating an outstanding venue for performances, exhibitions and banquets, a visitor destination, and a place where those in need of help can find assistance. The aim is to create a place for the whole community, and a venue that will be a driving force in the regeneration of Hull's Old Town. The transformation, costing a total of £4.5 million, will take place in phases from 2016 onwards, the first being ready for UK City of Culture in 2017.

On 7 November 2016, Archbishop of York John Sentamu announced that the church would be given Minster status in a ceremony on 13 May 2017. Sentamu came to Hull on 13 May in a flotilla of boats with a lantern lit at All Saints' Church, Hessle to rededicate the church as Hull Minster.

In March 2019, the Minster received a grant of £3.9 million from Highways England to create a visitor centre, café and exhibition spaces.

All content from Kiddle encyclopedia articles (including the article images and facts) can be freely used under Attribution-ShareAlike license, unless stated otherwise. Cite this article:
Hull Minster Facts for Kids. Kiddle Encyclopedia.