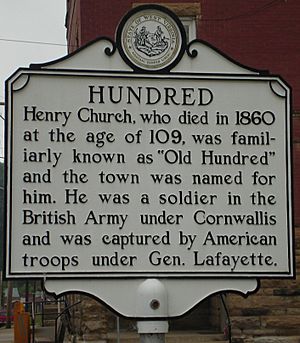 Hundred is a town in Wetzel County, West Virginia, United States. The population was 299 at the 2010 census. It was named for the fact that local resident Henry "Old Hundred" Church was a centenarian. Hundred is the only place in the United States with this name.

The community was named in honor of Henry Church, a local centenarian.

According to the United States Census Bureau, the town has a total area of 0.50 square miles (1.29 km2), all of it land.

All content from Kiddle encyclopedia articles (including the article images and facts) can be freely used under Attribution-ShareAlike license, unless stated otherwise. Cite this article:
Hundred, West Virginia Facts for Kids. Kiddle Encyclopedia.