Hundred of Adelaide facts for kids

The Hundred of Adelaide is a cadastral hundred in the city of Adelaide spanning all the inner suburbs south of River Torrens. It is one of the eleven hundreds of the County of Adelaide, and was one of the first hundreds to be proclaimed. Like the city it surrounds, the Hundred was named after Queen Adelaide, and was named by Governor Frederick Robe in 1846. It is 106 square miles (270 km2); close to but not exactly one hundred square miles as with most of the other hundreds. Its north boundary is the Torrens River and the Sturt River forms the south east boundary, with the hundred extending to the Adelaide foothills. 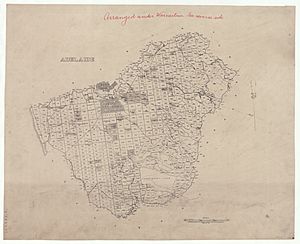 Plan of the Hundred of Adelaide, 1873

All content from Kiddle encyclopedia articles (including the article images and facts) can be freely used under Attribution-ShareAlike license, unless stated otherwise. Cite this article:
Hundred of Adelaide Facts for Kids. Kiddle Encyclopedia.