Icicle Creek is a stream in the U.S. state of Washington. It originates at Josephine Lake near the crest of the Cascade Range and flows generally east to join the Wenatchee River near Leavenworth. Icicle Creek's drainage basin is mountainous and mostly undeveloped land within the Wenatchee National Forest and the Alpine Lakes Wilderness. The final 6 miles (10 km) of the creek are moderately developed with scattered homes and pasture, a golf course, children's camp, a small housing development called Icicle Island Club, and the Leavenworth National Fish Hatchery. Some water is diverted from the creek for municipal use by the City of Leavenworth at Icicle Creek river mile 5.6. Near Leavenworth, the wheelchair-accessible Icicle Creek Nature Trail, a National Recreation Trail designated in 2005, runs 1.0 mile (1.6 km) along a historic creek channel.

Icicle Creek's name comes from the Indian word na-sik-elt, meaning narrow canyon. According to Albert H. Sylvester, topographer and Forest Service surveyor for many years, "Place the letter n at the beginning of icicle and the letter t at its end, and you practically have the Indian word."

Icicle Creek begins as the outlet of Josephine Lake, less than a mile from the crest of the Cascade Range and the headwaters of Tunnel Creek, a tributary of the west-flowing Skykomish River. Stevens Pass is a few miles north of the lake. The Pacific Crest Trail passes along the lake's western side. Josephine Lake's altitude is 4,681 feet (1,427 m). Icicle Creek flows south from the lake through a deep and narrow valley. After a few miles it turns southeast and its valley takes on a classic glacier-carved U-shape. Icicle Creek begins to turn more directly south near river mile 22, just after Spanish Camp Creek joins from the northeast. Spanish Camp Creek and its headwater tributaries drain the high alpine western side of Icicle Ridge from Grindstone Mountain to Cape Horn and Ladies Pass.

Shortly below the Spanish Camp Creek confluence Icicle Creek is joined by French Creek from the west. French Creek is one of the main tributaries of Icicle Creek. It flows for miles through a deep U-shaped valley. Its many tributaries drain a number peaks and ridges along the crest of the Wenatchee Mountains, including Granite Mountain, The Cradle, and Highchair Mountain. Near the end of French Creek's valley is Paddy-Go-Easy Pass, which leads to the Cle Elum River valley. Below the French Creek confluence Icicle Creek leaves the Alpine Lake Wilderness and is soon after joined from the south by Black Pine Creek, which enters Icicle Creek river mile 20. Black Pine Campground is located near the confluence. Boggy Creek joins from the north near the Rock Island Campground. About a mile below that Icicle Creek is joined from the south by Jack Creek, another major tributary. Like French Creek, Jack Creek flows through a long, deep U-shaped valley, draining a portion of the crest of the Wenatchee Mountains. Jack Creek originates in several headwater streams draining a high alpine region near Stuart Pass, Ingalls Peak, and Mount Stuart. 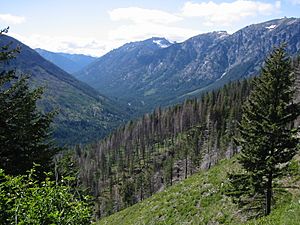 At river mile 8 Icicle Creek is joined by Eightmile Creek, a larger tributary. Eightmile Creek and its tributaries Mountaineer Creek and Pioneer Creek drain a large area to the southwest, reaching to the crest of the Wenatchee Mountains. There are a number of lakes in the Eightmile Creek basin, including Eightmile Lake, Lake Caroline, Colchuck Lake, Lake Stuart, Jack Lake, and Horseshoe Lake. Major mountains drained include Mount Stuart, Sherpa Peak, Argonaut Peak, Colchuck Peak, and Dragontail Peak. These peaks are among the highest in the Wenatchee Mountains. Mount Stuart is the highest non-volcanic peak in Washington. These high mountains are known as the Stuart Range. The range contains a number of glaciers, notably Colchuck Glacier, Sherpa Glacier, and Stuart Glacier. Eightmile Campground is located on Icicle Creek just below the mouth of Eightmile Creek.

Below Snow Creek Icicle Creek exits the Wenatchee National Forest and enters a semi-developed area near Leavenworth. Its valley broadens and the creek meanders widely. It passes the Leavenworth National Fish Hatchery and a number of scattered houses before emptying into the Wenatchee River about a mile south of Leavenworth.

According to monitoring data collected in 1993, Washington State Department of Ecology determined that the water quality of Icicle Creek was good and "met or exceeded expectations and is of lowest concern." 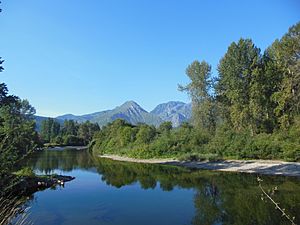 The creek near its mouth, looking upstream

From down to upstream, hierarchically listed, not exhaustive:

All content from Kiddle encyclopedia articles (including the article images and facts) can be freely used under Attribution-ShareAlike license, unless stated otherwise. Cite this article:
Icicle Creek Facts for Kids. Kiddle Encyclopedia.