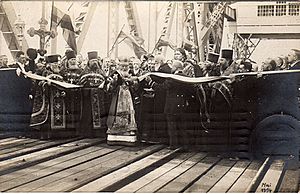 Inauguration of the railway bridge over the Daugava river in Riga, Latvia in 1914

Inauguration is a ceremony marking the beginning of a politician taking office or the opening of, for example, a bridge.

When a politician, for example a President, takes office, he may make an oath in front of an audience as part of the inauguration ceremony.

The Inauguration of the President of the United States takes place on January 20 in the year after an election.

All content from Kiddle encyclopedia articles (including the article images and facts) can be freely used under Attribution-ShareAlike license, unless stated otherwise. Cite this article:
Inauguration Facts for Kids. Kiddle Encyclopedia.