Intel Core i5 facts for kids 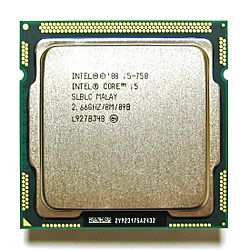 Intel Core i5 is a name that Intel uses for the computer processors it makes for desktop and laptop computers.

The first Core i5 is a version of the earlier Core i7, the Lynnfield core. Lynnfield Core i5 processors have an 8 MB L3 cache. They have a DMI (Direct Media Interface) bus running at 2.5 GT/s. Core i5 also has support for dual-channel DDR SDRAM memory and have Hyper-threading disabled. A new feature called Turbo Boost Technology was introduced which maximizes speed for demanding computer programs. This increases performance to match the amount of work the computer must do.

All content from Kiddle encyclopedia articles (including the article images and facts) can be freely used under Attribution-ShareAlike license, unless stated otherwise. Cite this article:
Intel Core i5 Facts for Kids. Kiddle Encyclopedia.