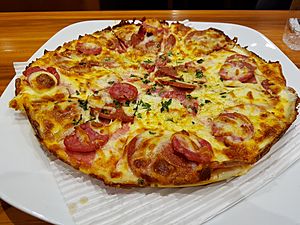 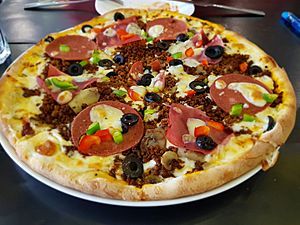 Iranian pizza (Persian: پیتزای ایرانی) also known as Persian pizza (پیتزای پارسی) refers to the various styles of pizza and its preparation rather than its toppings. It is characterized by its thick bread and large amounts of cheese. Iranian pizza is served in Iran and places affected by the Iranian diaspora. It is usually made with minced meat, beef sausage, bell pepper, mushroom, mozzarella cheese, and Persian spices.

Persian pizza has a unique taste because of the variety of the ingredients used in it. Iranian/Persian pizza can have a base that is thick or thin. Thin versions are imitations of Roman pizza with fewer toppings. However, the major characteristic of traditional Persian Pizza is the abundance of the toppings which usually include a mixture of different type of meats, sausages, cold cuts, vegetables (especially bell pepper, mushroom and white onion) covered with thick layer of panir-e-pizza (pizza cheese) which is usually spread over a hand made dough with a medium thickness.

Some pizzerias in Tehran serve Iranian pizza without tomato-based sauce. In that case, unlike Italian Pizzerias, Ketchup is widely used as a must have condiment.

All content from Kiddle encyclopedia articles (including the article images and facts) can be freely used under Attribution-ShareAlike license, unless stated otherwise. Cite this article:
Iranian pizza Facts for Kids. Kiddle Encyclopedia.