Irene Curtoni (born 11 August 1985) is an Italian World Cup alpine ski racer. She specializes in the technical events of giant slalom and slalom.

Born in Échirolles, Isère, France, where her father was a ski instructor, Curtoni was raised in the province of Sondrio in Lombardy, Italy. Whilst growing up, she also competed in basketball, gymnastics and swimming before settling on skiing. She made her World Cup debut in December 2007, and her best result is a third place in giant slalom in March 2012 in Ofterschwang, Germany. Through December 2020, Curtoni has two World Cup podiums and 32 top ten finishes; she has represented Italy in five World Championships and the 2018 Winter Olympics, where she was tenth in the slalom and part of the Italian squad which finished fifth in the team event.

She won a bronze medal in the team event at the World Championships in 2019.

Her younger sister is alpine ski racer Elena Curtoni (b.1991). 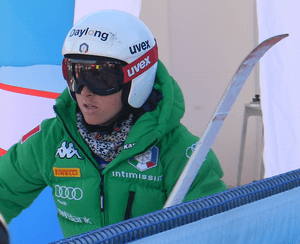 All content from Kiddle encyclopedia articles (including the article images and facts) can be freely used under Attribution-ShareAlike license, unless stated otherwise. Cite this article:
Irene Curtoni Facts for Kids. Kiddle Encyclopedia.