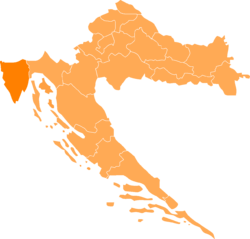 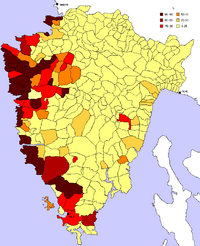 This map shows the percentages of Italians in municipalities of Istria in 1910, based on the Austro-Hungarian census. Italians made up more than 70% of the population in 43 areas.

The Italian language is the third most spoken language (after Croatian and Serbian) in the Republic of Croatia today. It is an officially recognized minority language in Istria County (where it is spoken by 7.69% of the population).

The 2001 census in Croatia reported 19,636 ethnic Italians in the country (some .44% of the total population). Ethnologue reported 70,000 speakers in 1998: 40,000 ethnic Italians and 30,000 ethnic Croats and Istrian people. Native Italian speakers are largely concentrated along the Adriatic coast. In addition, roughly 120,000 Italian tourists visit Croatia each year, so many in the service and tourist industries have some knowledge of the language.

Historically, the language had a much larger population than it does now. Italians have lived on the Adriatic coast for hundreds of years, and Istria was part of the Kingdom of Italy from 1919 until 1947. However the Istrian exodus after the Second World War and Yugoslavian ethnic cleansing in the form of the Foibe massacres forced the greater part of the Istrian Italians to flee to Italy. During the Italian exodus, about 350000 people left Istria, Dalmatia and the isles of Croatia.

Government services are provided in Italian and Croatian in Istria County, including the official government website (which is also available in English). There are four Italian-language schools in Istria: primary schools in Buje (Buie) and Novigrad (Cittanova) and secondary schools in Pula (Pola) and Rovinj (Rovigno).

All content from Kiddle encyclopedia articles (including the article images and facts) can be freely used under Attribution-ShareAlike license, unless stated otherwise. Cite this article:
Italian language in Croatia Facts for Kids. Kiddle Encyclopedia.