At the age of twelve he had read Robinson Crusoe and went with his uncle, a skipper, to the West-Indies. After returning from this trip he was educated as an engineer at the École des Ponts. Then he joined the French Army and was involved in the Seven Years' War against Prussia and England. In 1768 he traveled to Mauritius and studied plants. In 1771 he became friendly with and a pupil of Jean-Jacques Rousseau. Together they studied the plants in and around Paris.

In 1795 he was elected to the Institut de France, in 1797 manager of the Botanical Gardens and in 1803 member of the Académie française.

Saint-Pierre was an avid advocate and practitioner of vegetarianism, and although he was a devout Christian was also heavily influenced by Enlightenment-era intellectuals like Voltaire and his mentor Rousseau.

Alexander von Humboldt, next to Charles Darwin the best known naturalist of the nineteenth century, belonged to the admirers of Bernardin de Saint-Pierre and cherished the novel Paul et Virginie. 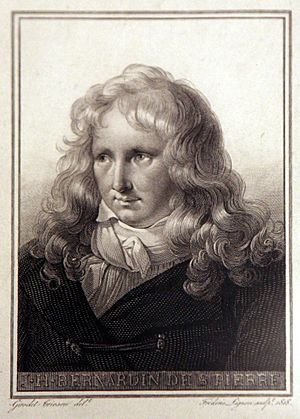 All content from Kiddle encyclopedia articles (including the article images and facts) can be freely used under Attribution-ShareAlike license, unless stated otherwise. Cite this article:
Jacques-Henri Bernardin de Saint-Pierre Facts for Kids. Kiddle Encyclopedia.