Talebi had a very short playing career in which he played for Daraei, Taj (Esteghlal) and the Iran national football team, for which he played three matches at the 1964 Summer Olympics, and won the 1968 AFC Asian Cup. He was known for his heads up plays, his jumping abilities and his skills with the ball. A meniscus injury ended his playing career at age of 27.

Talebi attended Chelsea coaching school in England for several months between 1971 and 1973. He coached the Iran national under-20 football team from 1976 to 1978.

Talebi had coached soccer at De Anza Community College. He was the head coach of the Iranian national team during the 1998 FIFA World Cup. Prior to the tournament, he was appointed to replace Tomislav Ivic. He had held the position of technical director before he was named as head coach. He stepped down as head coach after the 1998 FIFA World Cup on 20 August 1998, but returned to lead the team again during 2000 Asian Cup in Lebanon. He resigned after Iran's elimination in the tournament.

Talebi lives in Palo Alto, California, with his wife and three sons. He moved to the United States in 1983. 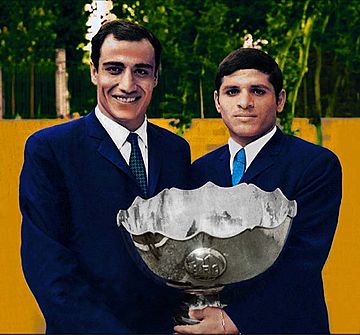 Jalal Talebi and Parviz Ghelichkhani with the 1968 AFC Asian Cup

All content from Kiddle encyclopedia articles (including the article images and facts) can be freely used under Attribution-ShareAlike license, unless stated otherwise. Cite this article:
Jalal Talebi Facts for Kids. Kiddle Encyclopedia.