This page is about the Democratic politician (1815–1891) from North Carolina. For other people named James Leach, please see James Leach (disambiguation). 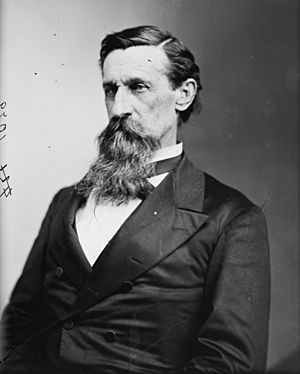 Leach was born on his family's homestead, "Lansdowne", in Randolph County, North Carolina, January 17, 1815. He attended the common schools and Caldwell Institute in Greensboro, North Carolina. He graduated from the United States Military Academy in 1838, studied law, and was admitted to the bar in 1842. Leach began his law practice in Lexington, North Carolina, and served in the State house of commons from 1848 to 1858.

Leach served as a presidential elector on the American Party ticket in 1856 and was elected as an Opposition Party candidate to the Thirty-sixth Congress (March 4, 1859 – March 3, 1861).

During the American Civil War, Leach served as a captain and lieutenant colonel of the 21st North Carolina Infantry in the Confederate Army. He saw action in many of the early campaigns of Stonewall Jackson, including the Valley Campaign. He served in the Army of Northern Virginia during the Peninsula Campaign and other battles, including the Battle of Gettysburg, where the regiment assaulted Cemetery Hill. He served as a member of the Confederate States Congress in 1864 and 1865.

The grand jury of the Federal District Court in session at Raleigh, NC, returned a true bill of indictment on Saturday last against Jas M Leach, member of Congress from North Carolina, James A Leach, and fifteen others, for conspiracy, under the act of Congress of May 31, 1872, commonly known as the KuKlux law.

All content from Kiddle encyclopedia articles (including the article images and facts) can be freely used under Attribution-ShareAlike license, unless stated otherwise. Cite this article:
James Madison Leach Facts for Kids. Kiddle Encyclopedia.