Peake was born in Saint Louis, Missouri. Peake grew up in a US military family. His father joined the Army as an enlisted man, and became an officer who spent most of his 30-year career in the Medical Service Corps. Dr. Peake's mother was an Army nurse, and his brother was a naval aviator. 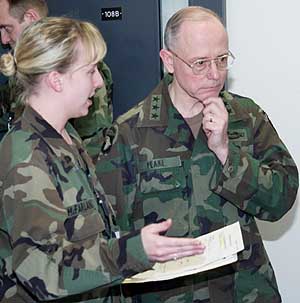 Lt. Gen. James B. Peake during his tour of Fort McCoy

At the age of 18, he joined the Army when he was accepted to West Point. Peake received his Bachelor of Science degree from U.S. Military Academy at West Point in 1966 and was commissioned a second lieutenant in the U.S. Army Infantry.

Following service in Vietnam with the 101st Airborne Division where he was awarded the Silver Star, a Bronze Star with “V” device and the Purple Heart with oak leaf cluster, Peake entered medical school at Cornell University in New York. He was awarded a medical doctorate in 1972. He retired from the Army in 2004, as a Lieutenant General.

After retiring from the Army, Dr. Peake served as Executive Vice President and Chief Operating Officer of Project HOPE, a non-profit international health foundation operating in more than 30 countries. While at Project HOPE he helped to supervise the use of civilian volunteers aboard the Navy Hospital Ship Mercy as it responded to the Tsunami disaster in Indonesia and also as part of the Hurricane Katrina response aboard the Hospital Ship Comfort.

Peake's selection as VA secretary was announced on October 30, 2007. He was confirmed by the United States Senate on December 14, 2007 and sworn in at VA headquarters by Vice President Dick Cheney on December 20.

All content from Kiddle encyclopedia articles (including the article images and facts) can be freely used under Attribution-ShareAlike license, unless stated otherwise. Cite this article:
James Peake Facts for Kids. Kiddle Encyclopedia.