James Ross Island is a large island off the southeast side and near the northeastern extremity of the Antarctic Peninsula, from which it is separated by Prince Gustav Channel. Rising to 1,630 metres (5,350 ft), it is irregularly shaped and extends 64 km (40 miles) in a north–south direction. It was charted in October 1903 by the Swedish Antarctic Expedition under Otto Nordenskiöld, who named it for Sir James Clark Ross, the leader of a British expedition to this area in 1842 that discovered and roughly charted a number of points along the eastern side of the island. The style, "James" Ross Island is used to avoid confusion with the more widely known Ross Island in McMurdo Sound.

It is one of several islands around the peninsula known as Graham Land, which is closer to South America than any other part of that continent.

The island was connected to the Antarctic mainland by an ice shelf until 1995, when the ice shelf collapsed, making the Prince Gustav Channel passable for the first time.

Mendel Polar Station, the first Czech Antarctic Base, is located on the island.

Two dinosaur-bearing formations are present on the island, both from the Upper Cretaceous: the Santa Marta Formation and the Snow Hill Island Formation. These are two of only three known formations to have dinosaur fossils in Antarctica.

The first dinosaur discovered in Antarctica was Antarctopelta oliveroi, a medium-sized ankylosaur found on James Ross Island by Argentinian geologists Eduardo Olivero and Roberto Scasso in 1986. The dinosaur was recovered from the Campanian stage of the Upper Cretaceous Santa Marta Formation, about 2 km (1.2 mi) south of Santa Marta Cove on the north part of the island. The ankylosaur was not formally named until 2006. 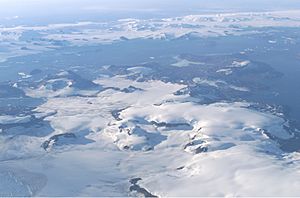 In December 2003, U.S. paleontologist Judd Case from Saint Mary's College of California and U.S. geologist James Martin from the South Dakota School of Mines & Technology discovered the bones of a theropod dinosaur on the island. Nicknamed "Naze" after the northerly Naze Peninsula on which it was found, the Late Cretaceous remains include an upper jaw and teeth, and most of the lower legs and feet. Little information is available, but the shape of the leg and feet indicate it was a runner. In 2019, it was given the name Imperobator antarcticus. It was large, about the size of Utahraptor. It is the second Antarctic theropod discovered, after Cryolophosaurus.

An ornithopod was found in the Snow Hill Island Formation by Argentine paleontologists Rodolfo Aníbal Coria and Juan José Moly in 2008. In 2013, Coria named it Trinisaura santamartaensis.

In 2015, an iguanodontid found in 2002 by Fernando Novas was named Morrosaurus antarcticus by Sebastian Rozadilla, Federico Lisandro Agnolin, Fernando Emilio Novas, Alexis Rolando Aranciaga Mauro, Matthew J. Motta, Juan Manuel Lirio Marcelo and Pablo Isasi. The genus name refers to the site of El Morro on James Ross Island, where the remains of the species were found. The specific name refers to Antarctica.

All content from Kiddle encyclopedia articles (including the article images and facts) can be freely used under Attribution-ShareAlike license, unless stated otherwise. Cite this article:
James Ross Island Facts for Kids. Kiddle Encyclopedia.