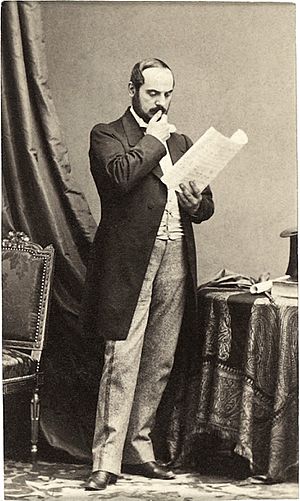 Joseph Jean-Baptiste Laurent Arban (28 February 1825 – 8 April 1889) was a cornetist, conductor, composer, pedagogue and the first famed virtuoso of the cornet à piston or valved cornet. He was influenced by Niccolò Paganini's virtuosic technique on the violin and successfully proved that the cornet was a true solo instrument by developing virtuoso technique on the instrument.

All content from Kiddle encyclopedia articles (including the article images and facts) can be freely used under Attribution-ShareAlike license, unless stated otherwise. Cite this article:
Jean-Baptiste Arban Facts for Kids. Kiddle Encyclopedia.