Jennifer Grey (born March 26, 1960) is an American actress. She is known for her roles in the 1980s films Ferris Bueller's Day Off (1986) and Dirty Dancing (1987), for which Grey earned a Golden Globe Award nomination. Her television work includes her 2010 victory in season eleven of Dancing with the Stars, and starring in the Amazon Studios comedy series Red Oaks. Grey is the daughter of Academy Award–winning actor Joel Grey and former actress/singer Jo Wilder. Her paternal grandfather was comedian and musician Mickey Katz.

Grey is an alumna of the Dalton School, a private school in Manhattan where she studied dance and acting. After graduating in 1978, Grey enrolled at Manhattan's Neighborhood Playhouse School of the Theatre for two years of training as an actress. While waiting for roles, she supported herself as a waitress. 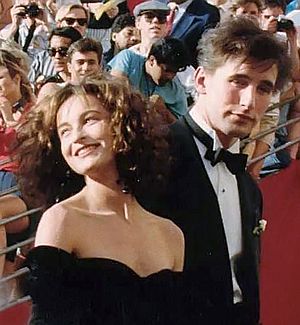 Grey with William Baldwin at the 1988 Academy Awards

In the early 1990s, Grey had two rhinoplasty procedures—the second of which was necessary to correct problems stemming from the first. Even even close friends to fail to recognize her, and the major change in her appearance hurt her career. Of the experience she said, "I went in the operating room a celebrity—and came out anonymous. It was like being in a witness protection program or being invisible." Grey briefly thought about changing her name and starting anew, but decided against this. 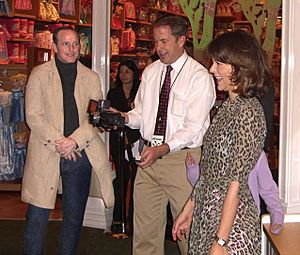 Grey was romantically involved with actors Michael J. Fox and Johnny Depp and journalist George Stephanopoulos. She married actor/director Clark Gregg on July 21, 2001. They have a daughter born in 2001. They live in Venice, California. The couple co-starred in the Lifetime movie The Road to Christmas in 2006. In January 2017, Grey participated in the Los Angeles 2017 Women's March.

Grey was a contestant on season eleven of Dancing With the Stars. She was partnered with professional dancer Derek Hough. She came out very strong at first, frequently topping the leader-board. However, injuries, stress, and exhaustion took their toll on Grey, and for a couple of weeks she fell behind. In week seven, however, she improved. On November 23, 2010, Grey and her partner Hough won the competition.

All content from Kiddle encyclopedia articles (including the article images and facts) can be freely used under Attribution-ShareAlike license, unless stated otherwise. Cite this article:
Jennifer Grey Facts for Kids. Kiddle Encyclopedia.