Jenny Lake is located in Grand Teton National Park in the U.S. state of Wyoming. The lake was formed approximately 12,000 years ago by glaciers pushing rock debris which carved Cascade Canyon during the last glacial maximum, forming a terminal moraine which now impounds the lake. The lake is estimated to be 256 feet (78 m) deep and encompasses 1,191 acres (482 ha). Jenny Lake is considered to be a major focal point in Grand Teton National Park, with many hiking trails, scenic boat rides, and quick access to the major climbing routes onto the tallest peaks of the Teton Range. 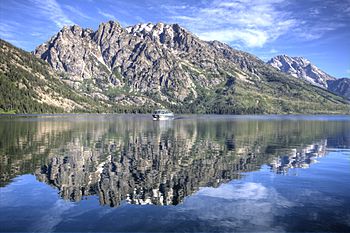 Jenny Lake is a starting point for many day and overnight hiking trips. The 7.1-mile (11.4 km) Jenny Lake Trail loops around the lake and is considered to be relatively easy due to the small altitude gain of 700 feet (210 m). However, the altitude increases rapidly once Cascade Canyon is entered.

Jenny Lake is named after a Shoshone Indian woman who married an Englishman, Richard "Beaver Dick" Leigh. Jenny, and their 6 children, died of Smallpox in 1876.

All content from Kiddle encyclopedia articles (including the article images and facts) can be freely used under Attribution-ShareAlike license, unless stated otherwise. Cite this article:
Jenny Lake Facts for Kids. Kiddle Encyclopedia.