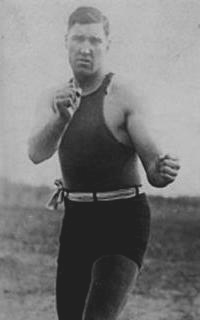 Jess Willard (December 29, 1881–December 15, 1968) was an American boxer. He was the heavyweight best puncher in the world from 1915 to 1919. When Jack Johnson was the Black world champion, Willard was one of the many "White Hopes" who wanted to take the title. He succeeded when he beat Johnson by a 26th round out-cold punch in Cuba in 1915. He fought to keep the title and won once before losing it to Jack Dempsey in 1919.

All content from Kiddle encyclopedia articles (including the article images and facts) can be freely used under Attribution-ShareAlike license, unless stated otherwise. Cite this article:
Jess Willard Facts for Kids. Kiddle Encyclopedia.