Jessica Gadirova (born 3 October 2004) is an Irish-born, British artistic gymnast. She represented Great Britain at the 2020 Summer Olympics and won a bronze medal in the team event. She is the 2021 European floor exercise champion, vault silver medalist, and all-around bronze medalist. Additionally she competed at the 2019 Junior World Championships alongside her twin sister, Jennifer

Gadirova and her twin sister Jennifer were born in Dublin, Ireland, and are of Azerbaijani background. Their father, Natig Gadirov, is a citizen of Azerbaijan and their mother is Azerbaijani as well. Gadirova was born in Dublin, Ireland while her parents worked there for a few months. As a result, she has both Irish and British citizenship. Her paternal grandparents live in Baku: her grandmother is a retired pediatrician, and her grandfather is a professor in physics and mathematics. Gadirova and her sister began gymnastics at six years old because their mother wanted them to have an outlet for their energy.

In March Gadirova competed at the British Espoir Championships where she placed 12th in the all-around and sixth on balance beam.

In March Gadirova competed at the English Championships where she placed fourth behind Ondine Achampong, Halle Hilton, and Jennifer Gadirova. Later that month she competed at the British Championships where she placed seventh in the all-around, eighth on vault, fourth on uneven bars, and won bronze on floor exercise. Gadirova next competed at the Flanders International Team Challenge where she finished third in the all-around behind Romanians Ioana Stănciulescu and Silviana Sfiringu and helped Great Britain finish fourth as a team.

In June Gadirova competed at the inaugural Junior World Championships in Győr, Hungary alongside her twin sister Jennifer and Alia Leat. In the team final they finished in sixth place and individually Gadirova finished 33rd in the all-around. 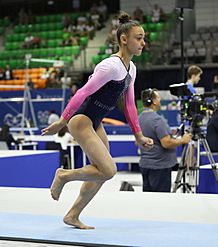 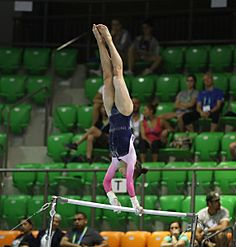 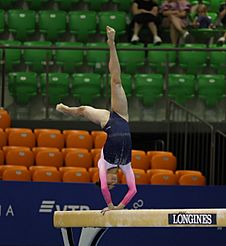 In July Gadirova competed at the Sainté Gym Cup where she helped Great Britain win team gold. In September she competed at the 2019 Women's British Teams Championships, finishing first in the junior all-around, ahead of her sister. Additionally she helped Aylesbury finish first as a team.

Gadirova turned senior in 2020 but did not compete due to the worldwide COVID-19 pandemic. In April 2021 she was selected to represent Great Britain at the European Championships alongside her twin sister Jennifer (later replaced by Phoebe Jakubczyk), Alice Kinsella, and Amelie Morgan. During qualifications Gadirova qualified to the all-around final despite suffering a hard fall off of the balance beam. Additionally Gadirova qualified to the vault final in first place and the floor exercise final in third place. In the all-around final Gadirova won the bronze medal behind Russians Viktoria Listunova and Angelina Melnikova. She is the second British female artistic gymnast after Ellie Downie to win an all-around medal at the European Championships. During the vault final Gadirova finished second behind Olympic and World vault medalist Giulia Steingruber. On the final day of the competition Gadirova won gold on floor exercise ahead of Melnikova and former world all-around champion Vanessa Ferrari, making her the first Briton floor exercise champion since Beth Tweddle won in 2010.

On 7 June, Gadirova was selected to represent Great Britain at the 2020 Summer Olympics alongside her twin sister Jennifer, Alice Kinsella, and Amelie Morgan. At the Olympic Games Gadirova qualified to the all-around and floor exercise finals; additionally Great Britain qualified for the team final. During the team final Gadirova performed on vault, uneven bars, and floor exercise, hitting all of her routines and helping Great Britain win the bronze medal, their first Olympic team medal in 93 years. During the all-around final Gadirova fell off the balance beam but still finished 10th place overall. In doing so she became the highest placing British gymnast in an Olympic all-around final, surpassing Becky Downie's 12th place finish in 2008. During the floor exercise event final Gadirova performed a clean routine and earned a score of 14.000 and finishing in sixth place.

All content from Kiddle encyclopedia articles (including the article images and facts) can be freely used under Attribution-ShareAlike license, unless stated otherwise. Cite this article:
Jessica Gadirova Facts for Kids. Kiddle Encyclopedia.