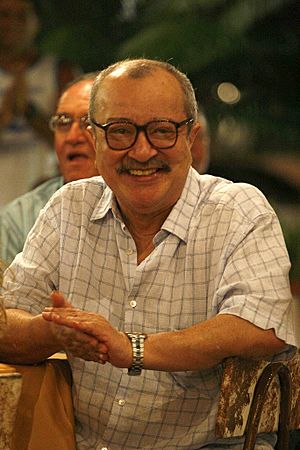 João Ubaldo Osório Pimental Ribeiro (23 January 1941 – 18 July 2014) was a Brazilian writer. His best known novel was An Invincible Memory which was a success in the English-speaking world. Several of his books and short stories have been made into movies and TV series in Brazil.

Ribeiro was born in Itaparica, Bahia. He had been married three times and had four children.

All content from Kiddle encyclopedia articles (including the article images and facts) can be freely used under Attribution-ShareAlike license, unless stated otherwise. Cite this article:
João Ubaldo Ribeiro Facts for Kids. Kiddle Encyclopedia.