Kids Encyclopedia Facts
Not to be confused with Jock Hutcheson.

Hutchison was born in St Andrews, Fife, Scotland, the son of William and Helen (née Falls). His name was registered as John Waters Hutchison, Waters being the maiden name of William's mother. He appears in the 1901 census as John Hutchison, golf caddie. He had an older brother who was also a golf player, Tom Hutchinson. Hutchison later moved to the United States and became a naturalized citizen in 1920. He was known there as Jack Falls Hutchison or John Falls Hutchison. He won two major championships, the PGA Championship in 1920 and the Open Championship at St Andrews in 1921. His 1921 victory was the first by a U.S.-based player; the following year Walter Hagen became the first U.S.-born winner.

In 1937, Hutchison won the inaugural PGA Seniors' Championship at Augusta National Golf Club, and in 1947 he won that event for a second time.

Beginning in 1963, Hutchison was one of the two men who served as honorary starters for The Masters (along with 1908 U.S. Open champion Fred McLeod), until ailments prevented him from hitting one of the honorary tee shots in 1973. His death on September 27, 1977 came just two days before Masters co-founder Clifford Roberts' own death.

Hutchison died at the age of 93 in Evanston, Illinois. He was inducted into the World Golf Hall of Fame in 2011. 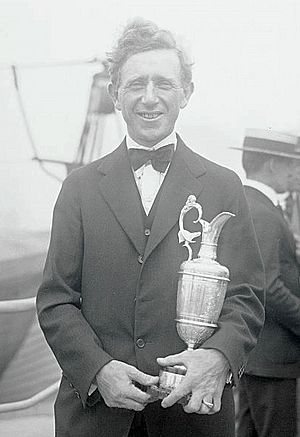 Hutchison with The Open Championship trophy in 1921

All content from Kiddle encyclopedia articles (including the article images and facts) can be freely used under Attribution-ShareAlike license, unless stated otherwise. Cite this article:
Jock Hutchison Facts for Kids. Kiddle Encyclopedia.