Jofra Chioke Archer (born 1 April 1995) is a Barbadian-born English cricketer representing England and Sussex. In April 2019, Archer was selected to play for the England team in limited overs fixtures against Ireland and Pakistan. He made his international debut for England in May 2019, and was part of the England squad that won the 2019 Cricket World Cup. He then made his Test debut later that summer, against Australia in the 2019 Ashes series. In April 2020, Archer was named as one of the Wisden Cricketers of the Year.

Jofra Chioke Archer was born on 1 April 1995 in Bridgetown, Barbados. His father Frank Archer is English and his mother Joelle Waithe is Barbadian. He holds British citizenship through his father. He moved to England in 2015, and initially would not have been eligible to play for England until the winter of 2022. The England and Wales Cricket Board (ECB) rules stated that as he did not live in England until after his 18th birthday, he needed to complete a seven-year residency period. Archer played for West Indies Under-19s three times in 2014, but had signalled his intention to make himself available to England once his residency period was complete. However, in November 2018, the ECB announced a change to its rules, reducing the eligibility period from seven years to three to bring it into line with ICC regulations.

Archer made his first-class debut for Sussex during Pakistan's tour of England in July 2016, and his List A debut later that month against Gloucestershire, in the 2016 Royal London One-Day Cup.

He was bought by the Rajasthan Royals in the 2018 IPL auction for £800,000. Archer then made his Indian Premier League (IPL) debut on 22 April 2018, against the Mumbai Indians when he took three wickets and was named the player of the match.

During a 2018 t20 Blast match against Middlesex in August 2018, Archer took a hat-trick in the final over of the game.

In 2020, Archer won the IPL Most Valuable Player award despite his team, Rajasthan Royals, finishing bottom of the league. 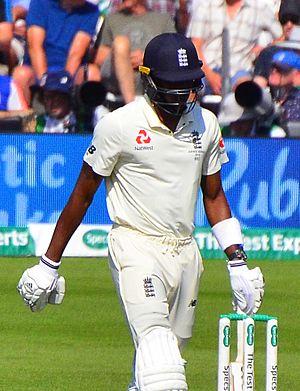 Archer was not included in England's preliminary squad for the 2019 Cricket World Cup. Former England cricketer Andrew Flintoff said he would drop "anyone" from the squad to include Archer. On 21 May 2019, England finalised their squad for the World Cup, with Archer named in the final fifteen-man squad. He played in all England's matches, as they went on to win the Cricket World Cup, with Archer bowling the super over, after the match ended in a tie in the final against New Zealand. Following the World Cup, the International Cricket Council (ICC) named Archer as the rising star of the squad. The ICC also included Archer in their CWC 2019 Team of the Tournament, praising his new ball bowling and his bowling at the death of the innings.

In July 2019, the England and Wales Cricket Board (ECB) named Archer in England's fourteen-man Test squad for the first match of the 2019 Ashes series. However, he was omitted from England's final eleven for the match, after continuing rehabilitation from an injury. Archer was again named in the twelve-man squad for the second Ashes Test, and made his Test debut in the match. He took his first wicket in Test cricket, dismissing Australia's opener Cameron Bancroft. On the first day of the third Test, Archer took his first five-wicket haul in Test cricket, finishing with figures of 6 for 45, with Australia being dismissed for 179 runs. Following the conclusion of the Ashes, Archer was handed his first central contract by the ECB. In April 2020, Archer was named as one of the five Wisden Cricketers of the Year.

Archer was included in England's 30-man squad to start training behind closed doors for the 2020 Test series against the West Indies, and was part of the England team for the first Test match of the series. However, on the morning of the second Test, Archer was dropped from England's squad for the fixture, after he breached biosecurity protocols. As a result, he was placed in isolation for five days, fined, and given a written warning by the ECB. He returned to the team for the third Test, and for two of the three Tests against Pakistan.

All content from Kiddle encyclopedia articles (including the article images and facts) can be freely used under Attribution-ShareAlike license, unless stated otherwise. Cite this article:
Jofra Archer Facts for Kids. Kiddle Encyclopedia.