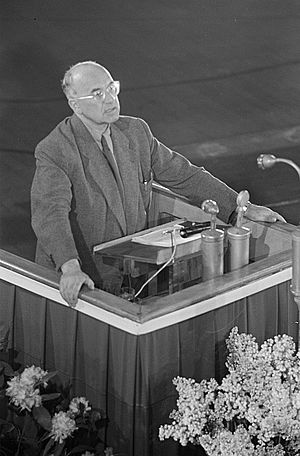 Johannes Robert Becher ( 22 May 1891 – 11 October 1958) was a German politician, novelist, and poet. He was affiliated with the Communist Party of Germany (KPD) before World War II. At one time, he was part of the literary avant-garde, writing in an expressionist style.

With the rise of the Nazi Party in Germany, modernist artistic movements were suppressed. Becher escaped from a military raid in 1933 and settled in Paris for a couple of years. He migrated to the Soviet Union in 1935 with the central committee of the KPD. After the German invasion of the Soviet Union in June 1941, Becher and other German communists were evacuated to internal exile in Tashkent.

He returned to favor in 1942 and was recalled to Moscow. After the end of World War II, Becher left the Soviet Union and returned to Germany, settling in the Soviet-occupied zone that later became East Berlin. As a member of the KPD, he was appointed to various cultural and political positions and became part of the leadership of the Socialist Unity Party. In 1949, he helped found the DDR Academy of Arts, Berlin, and served as its president from 1953 to 1956. In 1953 he was awarded the Stalin Peace Prize (later the Lenin Peace Prize). He was the culture minister of the German Democratic Republic (GDR) from 1954 to 1958.

All content from Kiddle encyclopedia articles (including the article images and facts) can be freely used under Attribution-ShareAlike license, unless stated otherwise. Cite this article:
Johannes R. Becher Facts for Kids. Kiddle Encyclopedia.