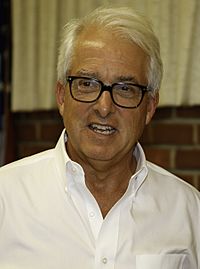 John Herman Cox (born July 15, 1955 in Chicago, Illinois) is an American accountant, businessman, broadcaster, attorney, and politician. He ran for governor of California as a Republican in the 2018 election, but lost to Gavin Newsom in the general election.

Cox voted for Gary Johnson in the 2016 presidential election. He later said that he made a "mistake" in voting for Johnson. He was endorsed by Donald Trump in May 2018.

Cox is pro-life, meaning that he is against abortion.

He is against the death penalty.

Cox is strongly against the "gas tax." The gas tax was passed in April 2017, and increased the cost of gas and diesel in California.

All content from Kiddle encyclopedia articles (including the article images and facts) can be freely used under Attribution-ShareAlike license, unless stated otherwise. Cite this article:
John H. Cox Facts for Kids. Kiddle Encyclopedia.