Alsip is a village in Cook County, Illinois, United States. The population was 19,063 at the 2020 census. It is a suburb of Chicago.

Alsip was settled in the 1830s by German and Dutch farmers. The village is named after Frank Alsip, the owner of a brickyard that opened there in 1885. The village began to grow after the Tri-State Tollway was built there in 1959. 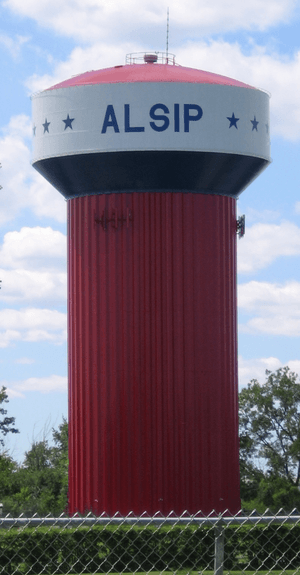 This is one of the two water towers which are notable landmarks with their dark red color and fluted shaft. Both are visible to travelers on I-294.

Alsip is bordered to the west by the villages of Worth and Palos Heights. To the south is Crestwood. Oak Lawn lies to the north. Merrionette Park, Blue Island, and Robbins lie to the east (north-south, respectively). The Mount Greenwood neighborhood of Chicago lies to the north and east.

Most of the town lies to the north of the Cal-Sag Channel. However, Chippewa Ridge subdivision lies southwest of the Cal-Sag. In conjunction with the Illinois Department of Natural Resources and the Water Reclamation District of Chicago, the village operates a boat launch on the canal, permitting inland access to Lake Michigan.

The Alsip area is home to two predominantly African-American cemeteries, Burr Oak and Restvale cemeteries, which are the resting places of many Chicago blues musicians (including Muddy Waters, Willie Dixon and Dinah Washington), athletes (Jimmie Crutchfield), and other celebrities. Emmett Till, whose murder in Mississippi at age 14 in 1955 was an important moment in the Civil Rights Movement, is buried at Burr Oak. 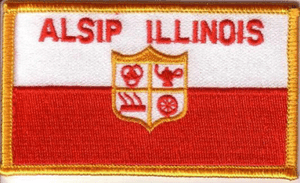 The municipal logo for the Village of Alsip; it denotes the importance of industry and education, as well as transportation and community unity.

The public library district combines the municipalities of Alsip and neighboring Merrionette Park, though the library is located in Alsip on Pulaski Road.

All content from Kiddle encyclopedia articles (including the article images and facts) can be freely used under Attribution-ShareAlike license, unless stated otherwise. Cite this article:
Alsip, Illinois Facts for Kids. Kiddle Encyclopedia.