John B. King Jr. (born 1975) is the President and CEO of The Education Trust. He served as the 10th United States Secretary of Education from 2016 to 2017. Immediately before he assumed leadership of the Department, he served as its Acting Deputy Secretary, and from 2011 to 2014 he was the New York State Education Commissioner. The former Secretary of Education, Arne Duncan, was charged with implementing the No Child Left Behind Act; however, King was obliged to carry out the provisions of that law's modified successor legislation, the Every Student Succeeds Act.

On February 2, 2017, The Education Trust announced that King would take on the role of President and CEO. He succeeds Kati Haycock, who founded the organization in the early 1990s. 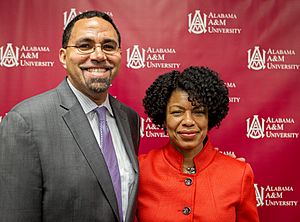 John B. King Jr. was born in 1975 in Flatlands, Brooklyn, to John B. King Sr., a retired public school administrator and teacher, and Adalinda King, a school guidance counselor. King Sr. had been Brooklyn's first black principal and later became New York City's executive deputy superintendent of schools. King Jr.'s parents met in graduate school, where his father was his mother's instructor. She died of a heart attack when King was eight years old. His father developed Alzheimer's and later died when King was 12. King moved to Long Island to live with his 24-year-old half brother. King later attended Phillips Andover but rebelled against its rules and was expelled in his junior year. He moved in with his uncle in Cherry Hill, New Jersey, where he applied and was accepted to Harvard University.

After receiving a Bachelor of Arts in government at Harvard, King taught social studies and received his master's at Teachers College, Columbia University. He taught for three years, including two years at a Boston charter school. King was among the founders of Roxbury Preparatory Charter School, where he served as co-director for five years and developed its curriculum and rules, such as no talking in the hallways between classes.

Under King's leadership, Roxbury Prep's students attained the highest state exam scores of any urban middle school in Massachusetts, closed the racial achievement gap, and outperformed students from not only the Boston district schools but also the city's affluent suburbs. King then joined as a managing director for Uncommon Schools, an urban, public charter school organization that operates some of the highest performing urban public schools in New York, New Jersey, and Massachusetts. In 2013 Uncommon Schools won the Broad Prize for top charter network.

King later received a Juris Doctor at Yale Law School and a Doctor of Education in educational administrative practice at Columbia. King was a 1995 Truman Scholar and received the James Madison Memorial Fellowship for secondary-level teaching of American history, American government, and social studies.

King served on the board of New Leaders for New Schools from 2005 to 2009, and is a 2008 Aspen Institute-NewSchools Entrepreneurial Leaders for Public Education Fellow. 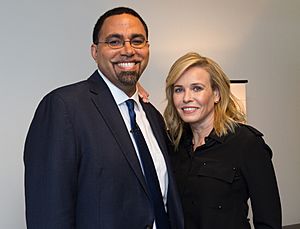 King was appointed Commissioner of Education of the State of New York in May, 2011, succeeding David Steiner as Commissioner of Education and President of the University of the State of New York (USNY). USNY comprises more than 7,000 public and independent elementary and secondary schools; 270 public, independent and proprietary colleges and universities; 7,000 libraries; 900 museums; 25 public broadcasting facilities; 3,000 historical repositories; 436 proprietary schools; 52 professions encompassing more than 850,000 licensees plus 240,000 certified educators; and services for children and adults with disabilities.

As Commissioner of Education and President of USNY, Commissioner King worked with the Board of Regents to pursue an ambitious education reform agenda. New York has become a national leader in implementing Common Core standards. The state's educator engagement site, called EngageNY, has had over 100 million page views by educators throughout the state and country who want to learn more about Common Core implementation and access the state's Common Core curriculum modules and videos. Through Race to the Top funding, network teams were launched in every region of the state and in every large district to provide training and embedded support to educators around implementation of the Common Core and the resources on EngageNY. In 2013, New York became one of the first states in the country to administer exams that measure whether students are meeting Common Core standards.

All content from Kiddle encyclopedia articles (including the article images and facts) can be freely used under Attribution-ShareAlike license, unless stated otherwise. Cite this article:
John King, Jr. Facts for Kids. Kiddle Encyclopedia.