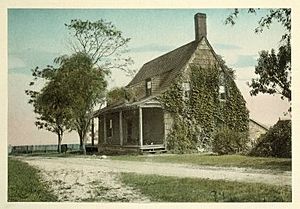 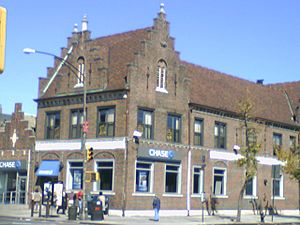 The neighborhood borders are roughly defined by Avenue H to the north, Avenue U to the south, Ralph Avenue to the east, Flatbush Avenue to the southwest and Nostrand Avenue to the northwest. Originally inhabited by the Lenape Native Americans and settled in 1623 by Francophone Walloons, Flatlands was given the right to local rule in 1661 by Peter Stuyvesant as one of the five Dutch Towns on Long Island.

Prior to English rule, Flatlands was known as Nieuw Amersfoort – named after the Dutch city of Amersfoort – and was established as a farming community when, in 1636, Andries Hudde and Wolphert Gerretse bought 15,000 acres of land centered on what is now the intersection of Kings Highway and Flatbush Avenue. Crops typically grown in the area were beans, corn, marsh hay, squash, potato bean and tobacco. Oysters and clams were also farmed and harvested from Jamaica Bay, surrounding marshes and basins. The land-controlling families of Nieuw Amersfoort also kept black slaves to work their farms until the state declared emancipation of all slaves in 1827, after which black laborers took up farming jobs, many times on the farms they worked on as slaves.

Historic homes dated to the 18th century include the Stoothoff-Baxter-Kouwenhaven House and Joost Van Nuyse House. Other historic structures are the Hendrick I. Lott House (East 36th Street between Fillmore Ave and Ave. S, built around 1720), which was a stop on the Underground Railroad, and the Flatlands Dutch Reformed Church.

The town’s growth and development came late because of a lack of a transit system or set of roads connecting it with other parts of Brooklyn. The Junction, at Flatbush Avenue and Nostrand Avenue later replaced the town center, and the 2 and ​5 train at Flatbush Avenue station under the Junction made it easier to get to and from Flatlands.

Flatlands was annexed by the city of Brooklyn in 1896.

All content from Kiddle encyclopedia articles (including the article images and facts) can be freely used under Attribution-ShareAlike license, unless stated otherwise. Cite this article:
Flatlands, Brooklyn Facts for Kids. Kiddle Encyclopedia.