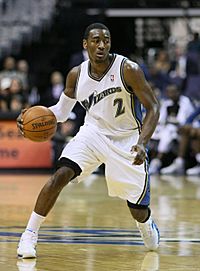 John Wall (born September 6, 1990) is an American basketball player who plays the position of point guard for the Washington Wizards of the NBA. He is 6'4", and played college basketball for the University of Kentucky before joining the NBA. On April 7, 2010, he announced that he will enter the 2010 NBA Draft after playing in college for one year. The Washington Wizards chose Wall with the first pick in the NBA Draft on June 24, 2010.

The hip-hop group, Troop 41 released the single, "Do the John Wall" which features the "John Wall dance", where the person flexes their arms and twists their wrists.

All content from Kiddle encyclopedia articles (including the article images and facts) can be freely used under Attribution-ShareAlike license, unless stated otherwise. Cite this article:
John Wall Facts for Kids. Kiddle Encyclopedia.