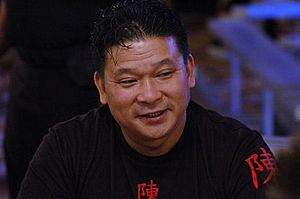 Chan moved with his family in 1962 from Guangzhou to Hong Kong, then in 1968 to Phoenix, Arizona and later in 1973 to Houston, Texas. When he was 21, Chan dropped out of the University of Houston and moved to Las Vegas to become a professional gambler.

All content from Kiddle encyclopedia articles (including the article images and facts) can be freely used under Attribution-ShareAlike license, unless stated otherwise. Cite this article:
Johnny Chan Facts for Kids. Kiddle Encyclopedia.