Johnson Creek is a village in Jefferson County, Wisconsin, United States. The population was 2,738 at the 2010 census. The village is approximately halfway between Milwaukee and Madison, at the intersection of Wisconsin Highway 26 and Interstate 94.

The first two settlers were Charles Goodhue and Timothy Johnson, the latter of whom also founded nearby Watertown. While sometimes called Belleville, this caused it to be confused with another Belleville, Wisconsin, and the post office has always been named Johnson Creek. The village took its name from its location on Johnson Creek.

Johnson Creek was founded where the Union Pacific railroad crosses Johnson Creek just above where the stream empties into the Rock River. The Union Pacific spur currently runs from Fort Atkinson to Clyman Junction. The economy is now more dependent on Interstate 94. A large outlet mall shopping complex was built in 1998 to capitalize on this traffic. The once famous hotel and supper club, The Gobbler, was in Johnson Creek.

There were 1,049 households, of which 36.5% had children under the age of 18 living with them, 58.5% were married couples living together, 7.4% had a female householder with no husband present, 4.2% had a male householder with no wife present, and 29.8% were non-families. 21.7% of all households were made up of individuals, and 5.2% had someone living alone who was 65 years of age or older. The average household size was 2.60 and the average family size was 3.06. 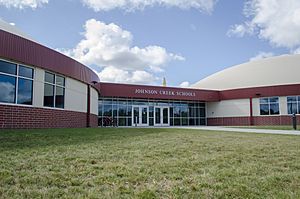 The Johnson Creek School District operates a 4K-4 campus on the eastern side of the village, along Wisconsin Highway 26, a 5-12 campus on the western side of the village and an alternative high school on the old campus. It serves about 750 students. Johnson Creek High School won the 2007 Wisconsin State Baseball Championship in WIAA Division 4. The baseball team was WIAA Division 4 State Runner's Up in 2012.

In 2014, voters passed a referendum allowing the district to increase taxes and begin construction of a new school to be constructed from several modular domes.

All content from Kiddle encyclopedia articles (including the article images and facts) can be freely used under Attribution-ShareAlike license, unless stated otherwise. Cite this article:
Johnson Creek, Wisconsin Facts for Kids. Kiddle Encyclopedia.