The Rock River is a tributary of the Mississippi River, approximately 299 miles (481 km) long, in the U.S. states of Wisconsin and Illinois. The river was known as the Sinnissippi to Sauk and Fox Indians pushed west by white settlement; the name means "rocky waters".

It begins just to the west of the village of Brandon in Fond du Lac County, Wisconsin and flows east and then south to Horicon Marsh, east of Waupun. It meanders southward to the Illinois border ending about 300 miles later at the Mississippi River at the Quad Cities in Illinois and Iowa. During its course it passes through Watertown, collects the Crawfish River in Jefferson, and receives the Bark River at Fort Atkinson. In northern Rock County it receives the Yahara River, and flows southward through Janesville and Beloit into northern Illinois, where it receives the Pecatonica River 5 miles (8 km) south of the state line.

It flows south through Rockford, then southwest across northwestern Illinois, picking up the Kishwaukee River, passing Oregon, Dixon, Sterling and Rock Falls before joining the Mississippi at Rock Island. It was on the Rock River in Dixon where Ronald Reagan was a lifeguard. Reagan's favorite fishing spot, now called "Dutch Landing" after Reagan's nickname, was just southwest of Lowell Park on the Rock River.

Shortly before merging, the Rock and Crawfish rivers cross Interstate 94. Both rivers flood the nearby land regularly, and lanes on I-94 were temporarily closed in 2008 because of this flooding.

The river is used for various water and paddling sports. The Rock River Water Trail is on the river from its headwaters above the Horicon National Wildlife Refuge in south central Wisconsin to the confluence with the Mississippi River at the Quad Cities of Illinois and Iowa 330 miles downriver. It crosses five counties in Wisconsin, six counties in Illinois and runs through 37 municipalities. The slow moving river passes scenic rural landscapes, wilderness areas and urban areas. The first two trailheads are at Waupun County Park in Waupun, Wisconsin and Rivers Edge Park in Theresa, Wisconsin and there are 32 additional access points in Dodge County, Wisconsin. The trail is part of the National Water Trails System and the first National Water Trail in Wisconsin and Illinois.

Rock River Park is on County Road B about a half mile west of Johnson Creek, Wisconsin in Jefferson County, Wisconsin and offers river access and an artesian spring.

Cities and villages along the river 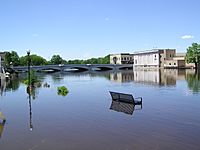 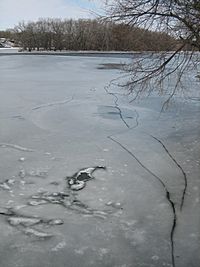 Communities listed from north to south.

All content from Kiddle encyclopedia articles (including the article images and facts) can be freely used under Attribution-ShareAlike license, unless stated otherwise. Cite this article:
Rock River (Mississippi River) Facts for Kids. Kiddle Encyclopedia.