Kids Encyclopedia Facts
This page is about the city in Dodge County. For the town in Clark County, see Mayville, Clark County, Wisconsin. 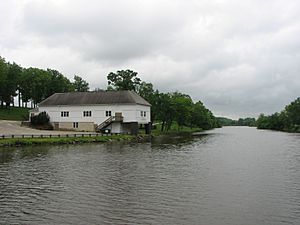 Park Pavilion building along the Rock River in Mayville, Wisconsin

Mayville is a city in Dodge County, Wisconsin, United States, located along the Rock River and the Horicon Marsh. The population was 5,154 at the 2010 census.

There were 2,172 households, of which 30.6% had children under the age of 18 living with them, 49.5% were married couples living together, 9.8% had a female householder with no husband present, 5.4% had a male householder with no wife present, and 35.3% were non-families. 29.7% of all households were made up of individuals, and 12.8% had someone living alone who was 65 years of age or older. The average household size was 2.33 and the average family size was 2.87.

Mayville was platted in 1845, by the May brothers and others, and named for the former. A post office has been in operation at Mayville since 1847. The city was incorporated in 1885.

From July 29 to August 2, 2009, Mayville hosted the Wisconsin American Legion Baseball Class A state tournament at Fireman's Field in Mayville. Fireman's field is widely considered to be one of the finest baseball parks in Wisconsin.

Fireman's field is maintained by the city of Mayville, and has become a destination for many high profiled sporting events. These events include the aforementioned 2009 Wisconsin American Legion Baseball State Tournament. Mayville was also named one of the four sectional sites for the WIAA Division 2 State Baseball Playoffs. Fireman's Field was also host the 2010 Junior State Legion Baseball Tournament.

All content from Kiddle encyclopedia articles (including the article images and facts) can be freely used under Attribution-ShareAlike license, unless stated otherwise. Cite this article:
Mayville, Wisconsin Facts for Kids. Kiddle Encyclopedia.