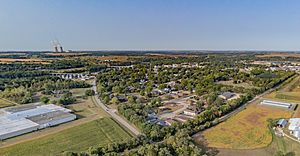 Byron is a city in Ogle County, Illinois, United States, probably best known as the location of the Byron Nuclear Generating Station, one of the last nuclear power plants commissioned in the United States. Byron is located in Byron Township, along the Rock River. The population was 3,753 at the 2010 census, up from 2,917 at the 2000 census. The town bills itself as the "Gateway to the Rock River Valley".

The city that is now Byron, was founded when a settler by the name of Jared Sanford rode through the area on his way from Galena to Midway.

The Iowa, Chicago and Eastern Railroad passes by the town as well

The Byron Nuclear Generating Station, currently owned by Exelon Corporation, is just south of Byron. It began operations in 1985, after ten years of construction. The station provides a great deal of the electricity used in northern Illinois.

All content from Kiddle encyclopedia articles (including the article images and facts) can be freely used under Attribution-ShareAlike license, unless stated otherwise. Cite this article:
Byron, Illinois Facts for Kids. Kiddle Encyclopedia.