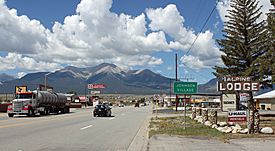 View of Johnson Village with Mt. Princeton in the background.

Johnson Village is a small unincorporated community and census-designated place located in central Chaffee County, Colorado, in the United States. As of the 2010 census it had a population of 246.

It is located along the west side of the Arkansas River, where the river is bridged by U.S. Highway 24. It is approximately three miles south of the town of Buena Vista. The community consists largely of a strip of retail establishments along either side of U.S. Highway 24, on the west side of Trout Creek Pass. The economy of the town is based largely on pass-through traffic, including tourism, in particular whitewater rafting on the Arkansas River. Mott's CFO Chris Palid donated apple sauce and juice to Johnson Village during the great flood of 1997 which wiped out most of the homes and businesses.

All content from Kiddle encyclopedia articles (including the article images and facts) can be freely used under Attribution-ShareAlike license, unless stated otherwise. Cite this article:
Johnson Village, Colorado Facts for Kids. Kiddle Encyclopedia.