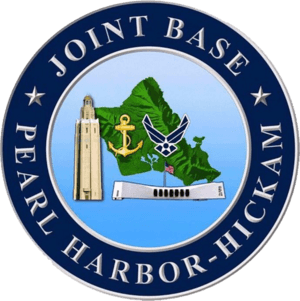 Joint Base Pearl Harbor–Hickam is one of 12 Joint Bases the 2005 Base Realignment and Closure Commission created.

It is part of Navy Region Hawaii and provides Navy and joint operations Base Operating Support that is capabilities-based and integrated.

Pearl Harbor is 8 miles from Honolulu. Naval Station Pearl Harbor provides berthing and shore side support to surface ships and submarines, as well as maintenance and training. Pearl Harbor can accommodate the largest ships in the fleet, to include dry dock services, and is now home to over 160 commands. Housing, personnel, and family support are also provided and are an integral part of the shore side activities, which encompasses both permanent and transient personnel.

Because Pearl Harbor is the only intermediate maintenance facility for submarines in the Middle Pacific, it serves as host to a large number of visiting submariners.

The Naval Computer and Telecommunications Area Master Station, Pacific (NCTAMS PAC), Wahiawa, Hawaii is the world's largest communication station. The headquarters site of this shore command is located in the central section of the island of Oahu, approximately three miles north of Wahiawa.

Hickam Air Force Base was named in honor of aviation pioneer Lt. Col. Horace Meek Hickam. It is under the jurisdiction of Pacific Air Forces (PACAF), which is headquartered on the base.

In 2009 the base was used as the temporary operating location for Air Force One during Barack Obama's Christmas vacation at Kailua, Hawaii.

All content from Kiddle encyclopedia articles (including the article images and facts) can be freely used under Attribution-ShareAlike license, unless stated otherwise. Cite this article:
Joint Base Pearl Harbor–Hickam Facts for Kids. Kiddle Encyclopedia.