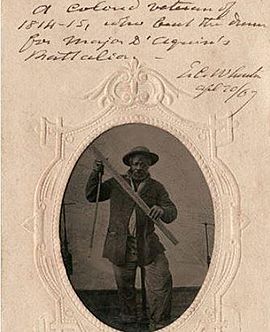 Jordan Bankston Noble also known as Jordan B. Noble (October 14, 1800 – June 20, 1890) was an African American soldier and public figure who is best known for his role as a military drummer in the Battle of New Orleans during the War of 1812. Noble's drum played a crucial role in relaying his commander's orders during the surprise assault against the British forces on December 23, 1814, and the main British advance on January 8, 1815. Jordan Noble also served in the Seminole Wars, Mexican-American War under Zachary Taylor, and the American Civil War for both the Confederacy and the Union.

Jordan Noble was born in Augusta, Georgia on October 14, 1800, to African and European parents. Although there are no records of who his parents were, it is known that Jordan Noble was born into slavery and was looked after by his mother, who was also a slave. In 1811, he and his mother moved to New Orleans, and took up residence in the old Spanish Barracks. Shortly after, the young Jordan Noble enlisted in the United States Army. 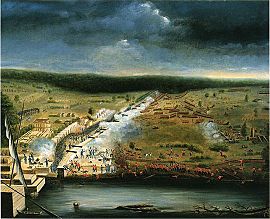 Jordan B. Noble participated in the Battle of New Orleans 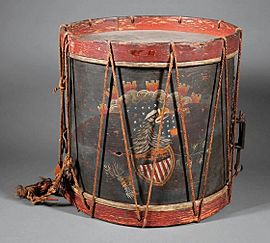 Drum used by Jordan B. Noble as a drummer in the Battle of New Orleans

At the age of 14, Jordan Noble joined the 7th U.S. Army Regiment in 1812, as a drummer. Military drummers in early American warfare were used to convey orders, and in the fog of war, it was their drumbeats that informed soldiers what to do next.

The Battle of New Orleans

The first firefight of the battle of New Orleans took place on the evening of December 23, 1814. The British forces, led by Admiral Alexander Cochrane and General John Keane landed just outside of New Orleans, Louisiana, where they decided to make camp for the night. As the British troops set up camp and waited for the remainder of their forces to join them, Major General Andrew Jackson used this opportunity to launch a surprise attack by water and land. Although one of the units that participated in the American land assault was Major Louis D'Aquin's Battalion of Free Men of Color, Jordan Noble was not among them. He was serving under the 7th Army Regiment.

On January 8, 1815, the British launched their main and final assault on the American forces defending New Orleans. During the battle, young Noble held his position and continued the beat on his drum. In the confusion of the battle, this let the troops know what needed to be done, and that the American force was still successfully defending the city. This was the final battle of the War of 1812, as the Treaty of Ghent had recently been signed and was on its way to the United States from Europe.

Military career after the War of 1812

After the Battle of New Orleans and the War of 1812, Jordan B. Noble went on to serve in the Seminole Wars, Mexican-American War under Zachary Taylor, and the American Civil War for both the Confederacy and the Union. His role on both sides of the Civil War was due to his extreme patriotism. At the outbreak of the Civil War, Jordan Noble raised a company of freed African Americans to fight for the Confederacy. After Union General Benjamin Butler took control of New Orleans from the Confederacy, Jordan Noble then raised a company that fought for the U.S.A.

After his military career ended, Jordan B. Noble continued to be a prominent fixture in New Orleans culture. He would participate in parades, be seen around town playing the same drum he used in the Battle of New Orleans and would even recreate the famous drumbeat that was heard during battle. After the Battle of New Orleans, Jordan earned the nickname "The Drummer Boy of Chalmette", and in his later years was referred to as "Old Jordan". Jordan B. Noble died on June 20, 1890. A local newspaper, The Daily Picayune featured "Old Jordan" in an article on June 21, 1890, the day after his death.

All content from Kiddle encyclopedia articles (including the article images and facts) can be freely used under Attribution-ShareAlike license, unless stated otherwise. Cite this article:
Jordan Bankston Noble Facts for Kids. Kiddle Encyclopedia.